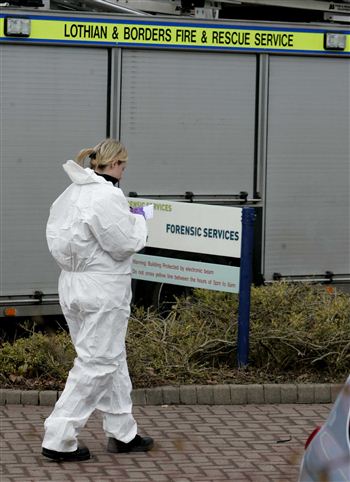 POLICE have released new descriptions of two men who are believed to have firebombed a major police forensics lab in an attempt to destroy criminal evidence.

Lothian and Borders Police are hunting a masked man and his getaway driver after incendiary devices were thrown through the windows of the Scottish Police Services Authority building in Edinburgh.

The attack on the Howdenhall facility in the early hours of February 18 damaged two offices and left the building out of action, with vital forensic work being passed onto Scotland’s three other labs.

A masked man was seen running from the building after throwing firebombs through ground floor windows, before getting into a small dark car driven by another man and speeding off.

The first suspect is described as white, between 20-30-years-old with a slim but muscular build, light brown hair and glasses.

He was wearing a blue T-shirt with ‘OSAKA’ and a number six on the front in white, blue jeans and white trainers.

The second suspect is described as white, between 20-30-years-old, tall with a slim build and short dark hair with a heavy fringe.

He was wearing a black hooded jacket, black trousers and black shoes.

Detectives say they are also keen to speak to the driver of a white Citroen Berlingo van, who was seen at the petrol station while the two men were there, and later near the scene of the blaze.

The blaze saw dozens of firefighters, police officers, and forensic staff scour the scene for clues as to who the two men are.

Detective Sergeant Mike Leask said: “Late last week we extended our enquiries to focus on the service station in the hope that the high volume of people coming and going may have seen something suspicious.

“We now know that these men did in fact visit the station and as such, we are appealing for anyone who may have seen them either prior to, or following the incident at the lab to contact police immediately.

“We would also ask that the driver of the white van make himself known to police as he may be able to provide us with information as to the movements of the two men believed to be involved in the fire.

“Similarly, anyone else with information that can assist with our investigation is asked to contact police immediately.”

The SPSA building in Edinburgh is staffed by around 60 forensic experts carries out all of Scotland’s toxicology examinations, providing expert analysis and consultation to the police, Crown Office and Procurator Fiscal.

It also provides 20 per cent of the total forensic work across Scotland, including firearms examination, DNA analysis and crime scene investigation.

The SPSA itself also is also responsible for all police training in Scotland, and runs the Scottish Police College at Tulliallan Castle in Fife.