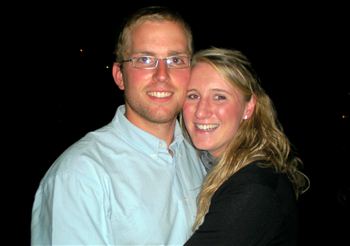 THE families of a Scots couple who went missing after the Chilean earthquake were anxiously awaiting news last night.

Dave Sandercock and Kirsty Duff, both 24, were on holiday surfing in Chile when the massive 8.8 magnitude quake struck the country’s second largest city, Concepcion.

The couple have not been heard from since before the city was hit by the quake, which has so far claimed the lives of around 700 people.

Dave, from Edinburgh, and Kirsty from Stonehaven, Aberdeenshire have been travelling and surfing around South American for the last few months.

Last night Dave’s sister Ellie issued a statement on behalf of both families, saying: “The families of Kirsty Duff and Dave Sandercock, British surfers in Pichilemu, Chile are awaiting news of their loved ones following Saturday’s earthquake.

“We do not have any specific news about them yet.”

Ellie said that the couple had studied together at Stirling University before going travelling together at the end of last year.

She added that the families were waiting to hear from Dave and Kirsty, or from the Foreign and Commonwealth Office.

A spokesman for the Foreign Office last night said they could not confirm how many British citizens were among the missing, but said that there had been “no reports of any casualties” as of yet.