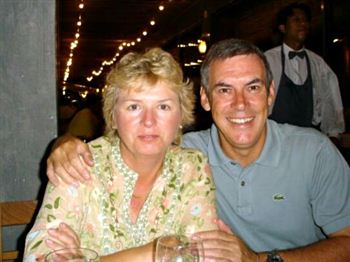 A SCOTS couple have spoken of their terror after being stuck at the top of one of Chile’s tallest buildings when last week’s devastating earthquake struck.

John and Beth Scott said they thought their “numbers were up” as they clung on to one another as the 35th floor of the Marriott Hotel in Santiago shook violently.

The couple, from Gifford, East Lothian, lay on the floor in darkness as objects flew around the room and the entire building rocked back and forth.

John said that the hotel swayed so much they thought it might collapse.

The 58-year-old said: “As the room began to move we rolled ourselves on to the floor and held onto each other while the room shook and swayed back and forth – the noise was horrible.

“The building was swaying so much we really thought our numbers was up.”

Beth added that the two minute earthquake had been “utterly terrifying and seemed to last forever”.

Once the two-minute quake had ended the couple grabbed their shoes and phones and ran down 35 floors of steps to escape.

John, the director of construction for a renewable energy firm in Chile, said: “We saw lots of other people making their way down, families with small children and a few dogs, everyone, including the pets, seemed to remain surprisingly calm.”

The couple’s daughters Fiona, 23, and Heather, 20, were staying in an apartment in the city when the quake struck.

Fiona said: “Because of the weak tremors often felt in Chile I was calm at first, but as the quake began to building into something far different to what we had ever felt before, I began to panic.

“We could hear the sound of glass shattering, car alarms sounding and screaming, but all we could think was that our parents were on the 35th floor of one of the tallest buildings in Santiago.

“I remember reassuring my sister, telling her they would be fine, that the building was strong – but I don’t think I was sure of anything at that point.”

John and Beth managed to find their daughters several hours after the quake hit.

And Fiona eventually managed to get a message to her grandparents Sandy, 85, and Beth, 83, back in Scotland, who had been frantically trying to get in touch.

The 8.8 magnitude disaster, which struck in the middle of the night, has so far claimed the lives of at least 723 people and left thousands homeless, and needing food and water.

The couple have lived in the Chilean capital since 1999, but spent five months last year back home in Gifford.

They have since returned to Chile and were staying at the Marriott while they looked for a new home.

Last night they were back on the 35th floor of the hotel in Santiago, where they admitted that the experience is still “quite frightening”.