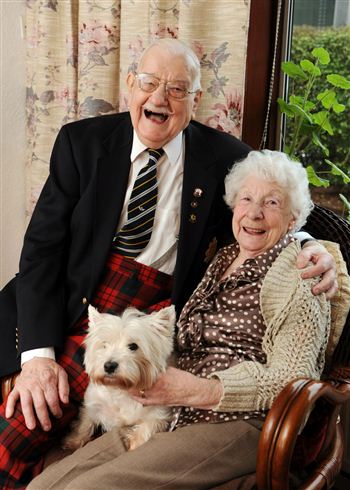 A COUPLE who first met on a blind date more than 70 years ago celebrated their platinum wedding anniversary yesterday.

George Romanis, 90, and Jemima Forrester first saw each other on the eve of the Second World War outside a cinema in Edinburgh.

But the happy couple had no way of knowing that they would be raising a glass together seven decades later.

Yesterday as the pair was joined by friends and family, Jemima, 88, joked: “I think the secret to a long and happy marriage is to put up with each other.”

Life-long Hearts fan George first met Jemima when he was stationed at Fort Leith with the Royal Army Service Corps.

A friend of George’s organised the blind date, which would lead to the couple spending the rest of their lives together.

Mr Romanis said: “My first impressions were good, but I think she was more interested in me that I was in her!

“We have been very close ever since.”

After George was called up to the war in Europe planned to marry on the first leave that he got and were married at St Michael’s Church in Edinburgh on March 2 1940.

George said: “She looked beautiful – she always has done.”

It wasn’t long before he had to return to war, forcing him to miss the first few years of his daughter’s Charmaine’s life.

He said: “Mima and I wrote to each other all the time but I never met Charmaine until she was four.

“I had photographs send out to me which was great, but it was difficult when I came home – I was a stranger coming into her life.

“She’s certainly used to me now though.”

George and Jemima, from the Lasswade area of Edinburgh, went on to have three more children and now have a huge family of nine grandchildren, eight great-grandchildren – and even two great-great grandchildren.

After leaving the army George worked in a rubber mill and later became a miner, while Jemima became a telephonist and post mistress.

Yesterday as they enjoyed a party with their many friends and family George said: “I wouldn’t change anything about the last 70 years.

“Mima is very easy to get on with and we both have a good sense of humour – maybe that’s the secret to a long and happy marriage.”