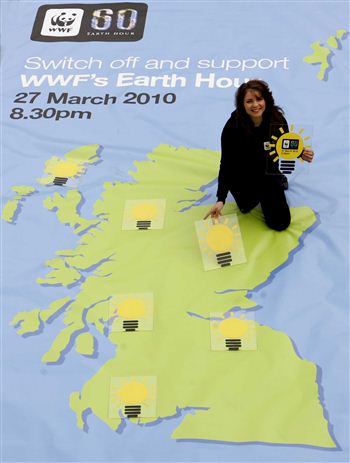 The foxy forecaster urged landmarks, businesses and homes across the nation to switch off the lights for Earth Hour 2010.

Government buildings, Glasgow’s George Square and Inverness Castle are already signed up to flick the switch on March 27, plunging Scotland into darkness for one hour to highlight action in climate change.

WWF are aiming to beat last year’s record when 88 countries signed up to the hour long blackout.

The former BBC weathergirl and meteorologist Heather Reid said: “WWF’s Earth Hour is a simple way for people to send a strong message that they care about climate change.

“We are witnessing more and more dramatic weather events, like the recent serious flooding in parts of Europe.

“The Scottish winter may have been very cold, but globally January 2010 was still one of the warmest on record. It is more important than ever that we all do our bit to tackle climate change.

“There are lots of ways to get involved and make WWF’s Earth Hour a special night. You can invite your friends round and have a candlelit supper, or maybe get your neighbours involved and try and get your whole street to turn off for the hour.

“If you have small children you might like to think about buying a wind-up torch and reading their bedtime story by torchlight.”

Dr Richard Dixon, Director of WWF Scotland said: “We are delighted a respected scientist like Heather Reid is lending her support to WWF’s Earth Hour.

“This year’s event promises to be bigger and better than ever with communities from around the world joining together again in a dramatic hour of action on climate change.”

Edinburgh residents urged to switch off lights for Earth Hour

Record Earth Hour participation with one day to go