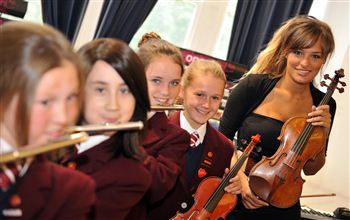 SCOTS classical music star Nicola Benedetti has revealed she is too scared to be at home alone after an “obsessive” fan harassed her.

The 22-year-old violinist had to report the incident to police after a man covering his face repeatedly rang the bell of her London home.

The Ayrshire-born musician now says she is so afraid she has to get friends and family to stay over at night.

She said: “Somebody buzzed the bell obsessively for 10 minutes.

“It was the middle of the night and in my dozy state I immediately went to press the button to let them in, because I have had friends come home late.

“Purely by chance I missed the button and thought, ‘You idiot, what are you doing?’

“I freaked out and badly and called Steph, my sister. She and her friend came round in their car to pick me up, but I couldn’t sleep all night.”

The former BBC Young Musician of the Year says she is still affected by what happened and has not yet come to terms with the incident.

She said: “I haven’t had one night alone there since, and keep getting people to stay with me.

“I’d never had anything like that happen before and always felt totally safe in my flat – it was just awful.”

Benedetti, who at just 16 won Young Musician of the Year and a received a £1million recording contract one year later has been approached by obsessed fans in the past, some of which asked her to marry them.

She added: “These people have the weirdest ways of getting phone numbers.”

The Scots star is not the first classical musician to be harassed by fans in recent years.

Fellow violinist Vanessa-Mae was hounded by a stalker for 10 years.

David Martin, from Brighton, was banned from approaching her west London home after he bombarded her with letters and kept a diary of her movements.

Martin was also caught being in possession of a knife and was later sentenced to six months in prison for breaking the restraining order.

Nicola – who once played 110 gigs in a year – has previously spoken about the pressures of becoming an international star as such a young age, but insists that she will not scale back her career.

The Metropolitan Police Service was unable to comment on the incident.