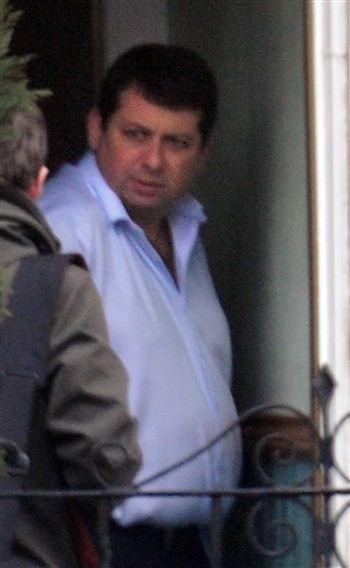 RICHARD Corsie’s fraudster son Cameron tried to get a job in SALES – boasting about a “proven track record” on his CV.

The teenage conman – locked up over a £20,000 series of scams last week – wrote to several employers in recent times looking for work.

He even used his position as Assistant Sales Director with his MBE dad’s failed company the Corsie Group PLC to try and win over would be employers.

The shamed trickster also lied: “I am honest, dedicated, trustworthy and courteous.”

The one -time Fettes College FP, who left the posh school in 2006, claims on his CV to have passed with mostly A’s and B’s from his studies, including top marks in Accounting and Finance.

He also went on to study at The Wallace College where he earned straight A passes in Economics, Accounting and Business Studies.

Shamed Corsie also details how he sold £33,000 worth of stock per month for Sony UK’s wholesale division, dealt with high profile clients including the BBC with firm Ipsos Mori, before working with his dad’s firm before it fell into liquidation in December 2007.

His CV continues: “I am an extremely energetic, enthusiastic and self motivated individual with first class interpersonal and communication skills at all levels and who quickly develops rapport with all those I have contact with.

“I am now looking for a challenging role within a dynamic and innovative company which will allow me to develop my future career and build on my prospects.”

“I am preferably looking for a job within a sales department, as I have a proven track record in this field.”

The only track record Corsie has now is a criminal one, having been convicted for fraud at Edinburgh Sheriff Court on Wednesday.

The Scottish News of the World first revealed how his own dad wanted to see him go down for bringing shame on his family.

He conned people out of thousands of pounds to fuel parties, hotel rooms and his gambling addiction.

Corsie used forged and stolen cheques to swipe the cash from his victims’ bank accounts.

The teenager – whose father is a triple world bowls champion – also sold music fans tickets for festivals and concerts he did not have.

He claims he was being forced into most of the scams by Kessar Ali, 21, who was last month fined £2,000 for assaulting Corsie.

But yesterday (Wednesday) Corsie was sent to a young offenders institute for eight months after he previously admitted 14 charges of fraud at Edinburgh Sheriff Court.

Corsie – who has been given community service and detention for similar offences in the past – had also pleaded guilty to one charge of operating a fraudulent scheme.

Along with business student Sukhmani Kaur, 21, and Amer Singh, 24, he used a stolen cheque to con a woman out of £6,289.63 at the Sony Centres in Edinburgh’s Shandwick Place and Morningside Road in April last year.

Fiscal depute Malcolm Stewart told the court how Corsie’s latest crooked venture came to light in May 2008 when a Miss N Purcell noticed £7,000 missing from her business account.

Mr Stewart said: “She immediately contacted the police who made enquiries in Edinburgh and they discovered that the cheque for £7,000 had been made payable to a Mr C S Corsie and paid into his account on April 11, 2008.

“The cheque that Mr Corsie had used turned out to be forgery and the accused was arrested on April 29, 2008 in Princes Street by two officers who recognised him.”

Corsie told police that he had been caught up in a string of frauds with Kessar Ali who, he said, had a contact in the Bank of Scotland who supplied him with forged cheques.

Mr Stewart added: “When asked about the proceeds Mr Corsie had said that he had spent his share of the money on rented property and he and his friends had had a number of parties there so the upshot us that no money has been recovered.”

Just days after he was released over that fraud, Corsie met an acquaintance in Princes Street Gardens and asked him for a loan of £200.

He then used Scott Soutar’s bank account details to swipe £8,587 from his savings between May 1 and July 7, 2008 at several branches around Edinburgh.

Mr Stewart said: “Once again the police made enquiries and at one of the branches of the Royal Bank in Corstorphine they obtained CCTV footage which showed Mr Corsie withdrawing money.

“Mr Corsie said that when he went to various branches he would tell the teller that he was Mr Soutar and because he had the account details would request a balance and the teller helpfully would provide him with a balance.

“He then pretended that he had left his wallet on a train or at home and on that basis he was allowed to withdraw the money.

“At one branch he was asked a security question and when he said he could not remember the answer the teller helpfully told him Mr Soutar’s mother’s maiden name.”

Corsie also admitted scamming £520 from music fans by selling them tickets to gigs and festivals.

The trusting music lovers transferred amounts ranging from £100 to £160 into his account during October 2008 and August 2009.

Mr Stewart added: “The complainers trusted him and transferred sums to Mr Corsie’s account in Scotland and of course thereafter did not get the tickets they were expecting.”

Corsie’s solicitor, Graeme Clark said that his client had come from a “good background” but had fallen into offending.

Mr Clark said: “He is from a good background and for some reason he has amassed a fairly lengthy record.

“He had become involved with a number of persons and with these persons he committed a number of frauds.”

Mr Clark said that after being given community service for previous offences, Corsie had told his friends that he no longer wanted to rip people off but claimed that they had made threats against him and his family.

He said: “He felt compelled to keep carrying out offences the proceeds of which he accepts he took some of the money.

“He said that once he started down that road he found it difficult to stop.

“It has been mentioned in police summaries that there has been a problem with gambling and that does seem to be the case.

“These are issues that could be explored by a probation order.

“He has money in his bank with which he could offer repayment of the sums.”

Corsie was remanded on February 2 this year after admitting the raft of offences and Sheriff James Scott said that the charges were too serious for any punishment other than custody.

Sheriff Scott said: “I’m satisfied that no sentence other than a custodial sentence is appropriate in your case given the gravity of offences and your record of offending.

“These are very serious matters and your fortunate not to be appearing on indictment.

“You can’t expect to be dealt with this way in the future.”

Corsie, of Sciennes Road, Edinburgh received the same sentence for two of the ticket scams.

The teen was given eight months in custody for the banking frauds and another two ticket cons.

Sheriff Scott said he had discounted the length of each sentence because Corsie co-operated with police and pled guilty.

He added that the sentences would be served alongside each other, meaning Corsie will serve a total of eight months.

Kaur had her sentence deferred for good behaviour while Singh was given 150 hours community service for their parts in the Sony Centre swindle.

Earlier this week Commonwealth Gold winning dad Richard, and MBE, spoke of his shame at his son’s action and called for him to be put away.

“But what he has done to people is deplorable and I want to be completely disassociated with him.

“I had no idea about this – it’s a huge amount of money.

“He has defrauded people in the past and that’s why we want nothing to do with him.

“I have a wife and a young daughter and I don’t want them to keep getting dragged into his trouble.

“We did what we could through school but it was a struggle for years to get him on the straight and narrow.”