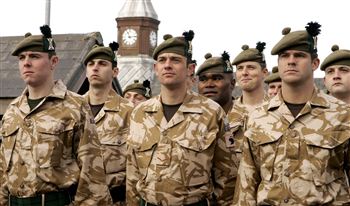 STANDING proud and tall in his regulation issue desert combats, Shaun Garrett checks the contents of his army rucksack one final time, handling the gas mask, rations, and weaponry that could very well help keep him and his colleagues alive.

It won’t be lost on some, however, that while this strapping lad from the tiny port town of Stranraer may be old enough to fight and should fate decide, die for his country, at just 17-years-old he isn’t yet old enough to buy a farewell round.

He doesn’t turn 18 until Saturday, his birthday.

By then he’ll be in Afghanistan, the babe of his unit, after the young private signed up 10 months ago, travelling from his Wigtownshire home to Edinburgh to join the Royal Scots Borderers, known as 1SCOTS.

Despite being the youngest member of the battalion, he insists he is ready for Afghanistan, as he and his colleagues stowed their gear ready to fly out to Helmand today.

He said: “This is what I want to do. I joined the army because I didn’t want to get stuck in a dead end job or hang around college.

“Joining the army is the greatest thing I’ve ever done.

“My mum keeps saying how proud she is of me but she’s really worried as well.

“A few the boys have been looking out for me, because I’m the youngest, so I’ll be ok.

“I’m nervous but I’m looking forward to getting out there.”

The nerves were raw everywhere yesterday as the hundreds of fellow soldiers prepared their six month deployment to Afghanistan.

Among them Lance Corporal Stephen McLaughlin who packed his kit at 1SCOTS’ Edinburgh HQ and prepared for the heat of Helmand province along with hundreds of his brothers in arms who deploy in waves over the coming days and weeks.

LC McLaughlin – known as ‘Mac’ – is the front man for his company’s patrols, tasked with detecting deadly IEDs.

He leaves behind his pregnant fiancée Emma, 23, and step-daughter Kayla, four, as C company departs on the first flights from Edinburgh in the early hours of today.

But the brave 25-year-old but admits he has not told his sweetheart just how dangerous his job is.

He said: “She’s quite upset that I have to go, but she knows I have a job to do. Emma doesn’t know that I’m front man, and what I do when I’m out there.

“She said ‘don’t tell me anything, just come back’.

“Kayla has been stuck to me for a month. She squeezes into bed every night and wants to be close to me all the time.

“I keep telling her that I’ll see her in September.”

The 6ft 3in dad from Rutherglen on the outskirts of Glasgow is a veteran of his company, having completed two tours of Iraq, including one just after the invasion in 2003.

1SCOTS task is to train the Afghan national army up to take over security operations, but much of the training will be on the ground in the deadly streets of Sangin.

As the company’s front man, Mac’s crucial role is to travel ahead of the main patrol and detect IEDs from crippling or killing his fellow soldiers.

Mac admits that he is apprehensive about facing IEDs and Taliban fighters, which last week claimed the lives of six comrades serving with neighbouring Edinburgh battalion 3 RIFLES in Helmand province.

He said: “Afghanistan is more intensive, more dangerous, but everyone has a good idea of what to expect.

“You hear on the news about what’s going on over there, especially to 3 RIFLES, and it makes you worry.

“I think they lost a guy every day last week, they’ve had a terrible casualty rate.

“Because I deal with the IEDs I know how dangerous it is out there, and it does make you worry.

“They have given us a brief and we’ve had extensive training to prepare us for Afghanistan.

“I’m scared about what might happen, but I’m excited as well.

“This is the job I have trained for.”

C Company’s commanding officer, Major Richard Forsyth, said that 1SCOTS extensive training would see them through the pressures of Afghanistan.

He said: “They’ve probably faced the most thorough training of any company going to Afghan.

“Our job as with the Operational Mentor and Liaison Team will be to live and work with the Afghan army seven days a week.

“They have fantastic understanding of the culture and that is something we don’t have.

“We will work together and hopefully ultimately counter the insurgency campaign that has had a grip on Afghanistan for so long.”

Ex-servicemen hope to raise money by driving across volcanoes