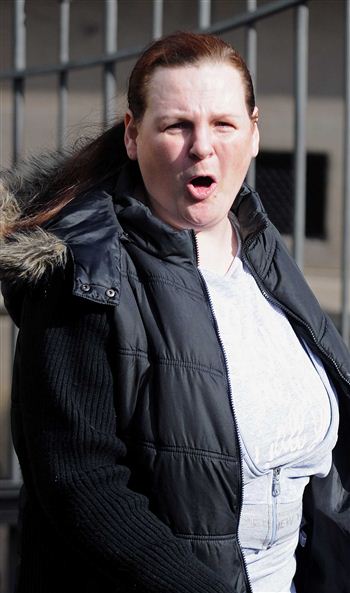 A WOMAN blinded a doorman by stamping her high-heeled stiletto through his eyeball after she was asked to leave a nightclub.

After a drunken argument, Sarah Marsden, 37, had agreed to leave Edinburgh’s upmarket Shanghai bar when she spat in bouncer Graham Roach’s face.

Before he had time to react, he was shoved to the ground and Marsden slammed her heel into his eye.

Mr Roach, 28, underwent a four-hour emergency operation, but doctors were unable to save his eyesight.

He faces further surgery this year to repair damage to his eye socket, in the hope he can at least wear a fake eyeball.

The attack on July 25 was sparked at 1.30am when Marsden and her friend Anthony Walker, 49, were asked to leave the trendy George Street club.

Mr Roach had been working on the door of Shanghai’s upstairs bar, Le Monde, when he heard the pair arguing with one of his security colleagues.

Walker was threatening to hit the bouncer, Andrew Pringle, with a bottle, according to fiscal depute Pauline Shade.

She told the court: “Mr Pringle was asking them both to leave and Walker was threatening to strike him with a bottle.

“At that point Mr Roach decided to approach both accused and take them back upstairs to George Street.

“However Walker continued to shout, swear, challenge the door stewards to fight and threatened to kill Mr Pringle.”

After a brief struggle, the drunken pair seemed to calm down.

But just when doorman Mr Roach thought he was safe to turn his back on the clubbers, he was brutally attacked in the street.

Miss Shade added: “Mr Roach sent his colleagues back downstairs thinking the situation was under control.

“He made to walk away from them, however Marsden spat directly into his face.

“Mr Roach turned around to take hold of her arm, however he collided with Walker and the two men fell to the ground.

“Whilst they were on the ground, Marsden approached where they were.

“She was wearing a pair of high-heeled stilettos and she stamped on Mr Roach’s face.

“The heel of her shoe entered Mr Roach’s eye-socket and in fact punctured his eye.”

His colleagues raced over to help, grabbing Marsden and Walker who were taken away by police while the victim lay bleeding on the ground.

An ambulance rushed Mr Roach to the Royal Infirmary of Edinburgh, where specialist eye surgeons were called in.

But the medics’ quick reactions were in vain.

Miss Shade said: “By this point Mr Roach was bleeding profusely from his eye and was in a great deal of pain.

“Due to the nature of his injury doctors were required to call in eye specialists and he had to go surgery.

“It was a four-hour operation and the surgeons had to retract part of his eyelid which had been torn open during the assault.

“Unfortunately, the damage to Mr Roach’s eye was too severe and the surgeons were unable to repair the damage.

“As a result, Mr Roach is permanently blind in that eye.”

After being arrested and taken to the capital’s St Leonard’s police station, Marsden’s only reply to officers was to say “sorry” once.

Walker was charged with breach of the peace, which he admitted in court yesterday.

Lawyers for the pair each said they would give mitigation before sentencing.

Sheriff Neil MacKinnon bailed Marsden and Walker and ordered them to return to court next month.