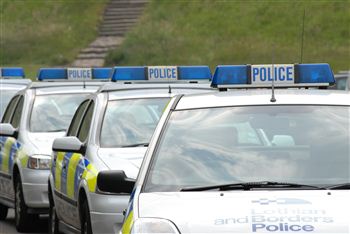 A DIM dad was so drunk that he stormed into a random man’s car thinking it was a taxi and demanded he be taken to a pub.

James Docherty, 26, said he thought the car must have been a private hire cab – because it was silver.

He shouted: “Get going you fat b******” at stunned driver Angus Gillies, 39, who had been sitting behind the wheel at traffic lights.

Mr Gillies managed to escape his own car to phone police and yesterday (Tuesday) Docherty was jailed for 243 days.

The Edinburgh man was initially also said to have abducted another driver and forced him to give him a lift before stealing his keys.

But prosecutors dropped abduction and theft charges when Docherty pled guilty to breach of the peace on December 13.

The city’s Sheriff Court heard how the dad-of-one phoned a handful of taxi companies before deciding to jump into Mr Gillies’ car at Howdenhall Road.

Fiscal depute Melanie Ward said: “Mr Gillies was about to move off from the traffic lights when the accused opened the passenger door and sat in the seat beside him.

“He shouted “Get going you fat b******,” and obviously Mr Gillies was alarmed by this behaviour.

“He could smell a strong smell of alcohol so took the keys out of his car and contacted police.”

Docherty’s agent, Fiona Cooper said the colour of the car convinced her client he had got into a taxi.

“There was nothing to say it was a taxi”

She said: “On the evening in question he had had a substantial amount to drink and had been phoning taxi companies repeatedly to get a lift to another pub.

“The complainer was in a silver car and Mr Docherty mistook it for a private hire car.

“If he had looked properly, there was nothing to say it was a taxi.

“He accepts he should have taken greater care and very much regrets the distress caused to the driver.”

She also said Docherty had been kept in custody over the mistake since December 15, and was unsure whether his girlfriend had given birth to their second child.

“He is very anxious to be at liberty to be with her,” she said.

Sheriff Neil MacKinnon said he would have jailed Docherty for a year had he gone to trial.

He said: “Due to the seriousness of this matter and your record of offending, only a custodial sentence is appropriate.

“The period of 12 months is modified to reflect your early plea and back-dated to the date of your arrest.”