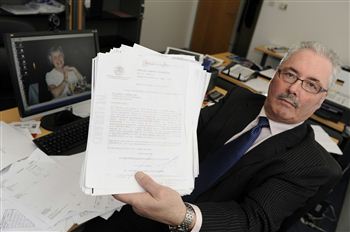 A BEREAVED son who believes his mother may have been murdered while on holiday in Mexico has met with Chancellor Alistair Darling in an attempt to find answers over her death.

The 57-year-old sales executive met with local MP Darling, who pledged to ensure the Foreign Office checks-up on the case, which Mexican police are treating as possible homicide.

He said: “Alistair Darling was very honest and extremely helpful, and he said he would do what he can to help.

“It’s very comforting to have someone like him on board.

“We have heard absolutely nothing at all from the Mexican authorities, they don’t tell you anything.

“All they are interested in is their tourist industry, they are not bothered at all about my mother’s death.”

Julia Howard was on holiday with her son and daughter Julia, 56, when she disappeared just 12 hours after arriving at the Moon Palace Golf & Spa Resort in June last year.

Her body was only found five weeks later, despite searches by hotel staff and Julia’s family.

The widow had told her family that she was going to find her sun hat while they sunbathed, but never returned.

She never made the 35-yard walk to her room, but according to the hotel staff she did not leave the hotel.

In November the family had a report translated which stated that the death was being treated as a possible murder.

At the time Henry said: “To me there are only two things that could have happened, either my mum had an accident and her body was put where it was found, or she saw something and was murdered for what she saw, and the body was then put there.”

He has pledged to return to the resort with his wife Glynnis, 55, on the anniversary of her disappearance to keep the focus on the case, which he believes the Mexican authorities may have dropped already.

He added: “Everybody seems to think this is going to go away but it’s not.

“My mum was the most important person in the world to me and there’s no way we can let it go.”

Julia Howard is just one of several tourists who have vanished while on holiday in Mexico.

In April 2009 US citizen Ron Scheepstra, 49, vanished from nearby Xcalak while on a fishing trip.

While Canadian newspaper reports suggested that the death of Jeff Toews, 33, may have been caused by a savage assault in 2007, and not a drunken fall as Mexican police stated.

“They find themselves in a very distressing position and I’ve taken up the case with the Foreign Secretary to try and get answers from the Mexican authorities.”