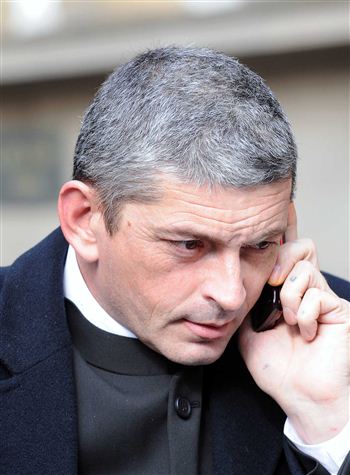 Ian Rodhouse, 43, would travel to Edinburgh from his former home in Slough to visit a woman friend he knew each weekend, abusing the child while she was out at work.

Rodhouse preyed on the youngster at an address in Edinburgh when she was getting changed into her school uniform in the mornings.

He would also walk in on her having baths, lather up her back with soap before touching her indecently.

And he made chilling threats to the girl not to tell anyone about the year-long campaign of abuse, warning that her pocket money could be taken away if she did.

But the victim seized upon a row between the woman and Rodhouse to show-up his perverted and controlling crimes.

He begged them not to call police, but the terrified schoolgirl made sure he was arrested, phoning 999 herself.

Rodhouse broke down in tears in the dock at court today (Monday) after admitting he was “disgusted at himself.”

He pleaded guilty at Edinburgh Sheriff Court to two charges of lewd, indecent and libidinous behaviour and practices against the girl – who cannot be named for legal purposes – throughout the whole of 2008.

Fiscal depute Pauline Shade said Rodhouse would sometimes get into the schoolgirl’s bed and rub her body.

She said: “In 2008 he began going into (the girl’s) bedroom at night during weekend visits.

“He would climb into bed with her, cuddle her and touch her breasts and private parts.

“It is not possible to say just how many times he acted in the manner described.

“On each occasion she would ask him to stop what he was doing, however he continued and said that people would be angry if she told them.”

As more disturbing evidence was read out, Rodhouse hanged his head in the dock while wiping away tears.

Miss Shade told of another occasion when the victim was left in tears after being abused by Rodhouse while she was having a bath.

The girl broke her silence later that day after catching Rodhouse using an internet chat room.

Miss Shade said: “The girl told the woman that she had seen him using an internet chat room.

“The couple began to argue and she told him she was ending the relationship.

“At that point the girl told (the woman) she had something else to tell her about.

“She said Rodhouse had been touching her and she was upset and crying.

“He was confronted about what was said and he began to cry when she said the police would have to be called.

“He asked her not to call them and that he could get help and deal with it that way.

“The victim called police from her mobile and was upset when they arrived, while the woman was also hysterical, asking police to take him away.”

During interview Rodhouse told police he wanted to take his own life.

And he said: “I used to tickle her back but at some point I over-stepped the mark.”

Miss Shade said: “He said they were just larking about having a giggle at first.

“But he also said he was disgusted with himself, felt terrible about what he had done and that he knew it was wrong.”

Defence agent Eddie Robertson said: “This is obviously a serious matter and he realises the most obvious sentence is custody.

“He has accepted his guilt fully.”

Rodhouse, who now lives in Edinburgh, was bailed by Sheriff James Scott and ordered to sign on to the Sexual Offenders’ Register.

He must return to court next month for sentencing.