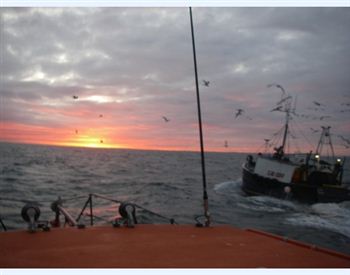 A LIFE boat crew were treated to the unexpected reward of a bag full of live prawns after they rescued a stranded fisherman.

The crew of the new Kinghorn RNLI boat were given the fishy gift after they were called to rescue a vessel stuck in the Firth of Forth yesterday (Monday).

Despite not yet being officially named yet, the new boat was on its 6th rescue in a fortnight when they attended the call.

Helmsman Scott McIlravie said: “We had to struggle through some rolling waves near the harbour entrance which made things quite tricky, but my crew were great and we managed to put her alongside the outer Harbour area.

“I reckon had we been delayed another 15 minutes, then we would have been unable to get her in.

“The captain was over the moon with the assistance we had provided, and despite our protests, he lavished on us a generous helping of fresh prawns for our efforts.

“We also managed to get home by 7.10am, in time to start our work – so I’ll be thinking of recipes for prawns throughout the day.”