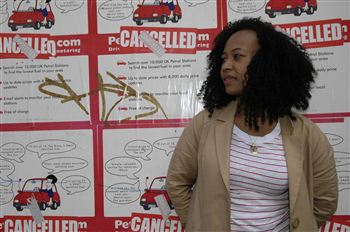 It comes just months after Emeli Sande signed a publishing deal with music giants EMI and performed on stage at the MOBO awards.

The Aberdonian has been pursuing a music career since she was a schoolchild and has celebrated a whirlwind year.

Taking a break from her studies at Glasgow University, Emeli has enjoyed success both with her writing and performing.

As well as Chipmunk, X-Factor judge and Girls Aloud star Cheryl Cole has recorded another of Emeli’s songs – ‘Boys’ – for her upcoming solo project.

And she had been building up a bank of songs for her own album, releasing the single ‘Daddy’ and working on collaborations with other artists.

She is currently racing up the charts with Wiley on the song ‘Never Be Your Woman’ – which is at number 14 in the top 40 just now.

Emeli said: “I went to London to do showcases for about six different record companies.

“There’s been different interest in signing me up but I wanted to be in a stronger position so that’s why we decided to release a single independently.”

Her schedule will now be even busier than before, and the singer’s recent move to London will allow her to juggle her various projects.

Writing was something the artist never though she would do seriously – only coming about through a chance meeting.

Emeli said: “I was doing a show in London for 1Xtra and I met this guy called Naughty Boy.

“He has been trying to build up his name as a producer and asked if I wanted to work with him on a few things.

“We got in the studio and we clicked work wise. I just really enjoyed listening to what he was doing – it was so different from other people’s stuff.

“We just started writing, not necessarily for me, we just thought ‘lets write a pop tune’ and experiment.

“And we wrote the Chipmunk track and I thought nothing of it. Naughty Boy sent it off to Chipmunk who really liked it and wrote his stuff around it.

“It’s just strange that some little song that I wrote in my bedroom has had so much success and airplay. It’s crazy.”