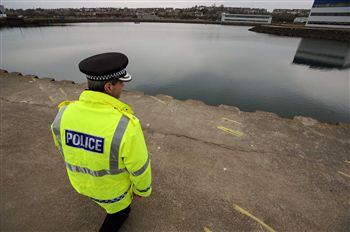 A MAN who died after crashing a stolen pick-up truck into a Scots harbour as he was tracked by police had previously sparked a £30,000 chopper rescue drama after stealing a fishing trawler while drunk.

The body of Fife man Kevin Purves, 44, from Methil, was yesterday pulled from the wreckage of the truck which plunged into the water at the town’s harbour during the police chase on Wednesday.

Witnesses told how they had looked on in horror as the truck – which had been stolen from the Forth Road Bridge authority – careered off the jetty at Methil Docks, disappearing under the surface within seconds.

One shocked local said he “never stood a chance” of surviving the incident which happened shortly after 4pm.

Specially trained divers from Central Scotland Police retrieved the body of Purves at around 10pm on Wednesday.

A recovery crew later used a crane to haul the wrecked vehicle to shore at around 1am.

Members of his family – thought to have included his father and window cleaner brother Darren – attended the scene with a senior officer yesterday lunchtime.

They examined skid marks clearly defined on the quayside and marked by police accident teams probing the fatality.

Central Scotland Police are carrying out an investigation into the circumstances because of Fife Police being involved in the pursuit before Mr Purves died.

Last night it emerged he had been in trouble with police in the past and appeared in Cupar Sheriff Court after hijacking a fishing boat, sparking a major manhunt involving three rescue choppers.

According to court records from 1989, Purves had stolen his father’s £150,000 fishing trawler two years earlier while under the influence of drink or drugs, causing £30,000 damage to the taxpayer.

Three helicopters from Leuchars, Lossiemouth and Northumberland were deployed to search for the intoxicated 23-year-old, who had called the coastguard after sobering up.

His father was lowered down to the ‘Ina McBain’ by helicopter, before taking control of the vessel.

Purves was later ordered to pay £7,300 in damaged by Sheriff John McInnes after appearing before Cupar Sheriff Court.

Fiona Mackenzie, from Leven, who works in a café near to where the incident occurred said: “I don’t know him myself.

“But people have been saying he was in trouble a few years ago when he took a boat.

“He had to call the coastguard out, when he got stuck. But that’s the only trouble I’d heard of, it’s terrible what happened.

“I just hope the family are being looked after, it must be a hard time for them.”

Yesterday Fife Police refused to comment on the events leading up to the vehicle entering the water.

However one eyewitness said police at the scene did nothing to try and help Purves who was trapped in the sinking truck.

Ian Davidson said he witnessed two police cars chase a yellow van through Methil docks in Fife before it ran off the edge and landed in the water.

The 59-year-old design manager at JKF Group Limited, said: “I was in my office when I heard the roaring of an engine.

“It was deafeningly loud because of the way the dock amplifies sound.

“I looked out the window and saw a yellow van go into the water, it was very dramatic.

“It floated for about 15-20 seconds before sinking, whoever was inside never stood a chance.

“Two police cars were there in just 10 seconds.

“At first I thought that’s strange that the there so quickly, but I realised there had been two police cars chasing the van.

“It wasn’t long before there were five police cars there but no one tried to help the driver.”

Yellow chalk marked where the van had entered the water, showing that it had turned right before plunging about eight feet down into the icy water.

More chalk marked where water had splashed onto the harbourside further down.

Last night the family were too upset to speak about the incident.

After speaking with him for around 20 minutes, they got back in their car and drove away, before stopping on the opposite side of the harbour to take pictures.

Speaking at the scene, Superintendent Pow, said that an investigation was underway into the events leading up to the man’s death.

He said: “I can confirm that the body of a 44-year-old local man was recovered from a stolen yellow pick-up truck that had entered the water at Dock No.3 at Methil Docks yesterday.

“The vehicle was being used by Forth Road Bridge staff when it had been stolen earlier in the day.

“Officers from Fife Constabulary had been alerted to the presence of the vehicle on South Road Methil shortly before the vehicle entered the water.

“Specialist officers from Central Scotland Police Divers Unit attended and assisted in the recovery of the man’s body, which was found in the vehicle.

“The vehicle was eventually recovered in the early hours of this morning.

“The man’s identity is not being released until next of kin have been informed.”

It was understood the stolen van had been used by bridge inspectors when it was stolen from the bridgehead area.

A police unit spotted it in Lower Methil near Bawbee Bridge and followed it towards the docks in the Dubbieside district, near to East Fife FC’s ground.

No details were released yesterday of whether any police sirens or lights had been used during the incident.

But the pursuit was not thought to have been at any significant speed, according to sources close to the investigation.

Superintendent Pow said: “Central Scotland Police, who assisted in the recovery of the man’s body, have also been invited to review the circumstances of police involvement prior to the vehicle entering the water at dock three.”

“Fife Constabulary will not be commenting on their involvement in the pursuit of the vehicle as there is an impending investigation by Central Scotland Police.”

Last night at their home in Methil, none of Mr Purves family was willing to comment.

Darren, who answered the door, said: “We don’t want to talk about it.”

A Post Mortem was still to be held, police said.