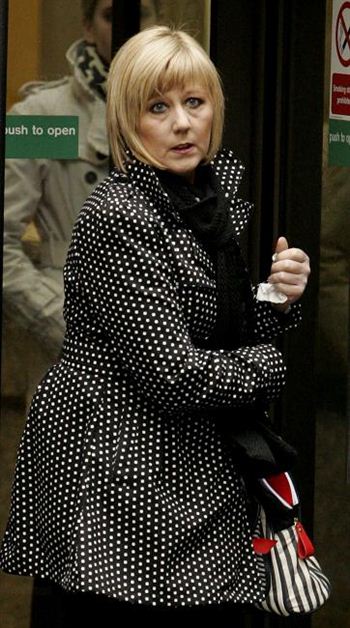 A SHAMELESS bank manager took over £36,000 from customers including a dead man, a disabled elderly couple and one of her own neighbours.

Former Lloyds TSB boss Arlene Wales, 42, told her victims she would help them with their finances, only to embezzle massive sums of cash behind their backs.

She used the money to live a lifestyle she couldn’t afford, while hiding behind a £90,000 credit card debt.

In a bid to solve her own personal financial disaster she targeted five customers at the Dalkeith, Midlothian, bank branch.

But her scheme was snared when the daughter of the late George Clarke was arranging his estate and noticed cash had gone missing.

Police arrested Wales at her home in Bonnyrigg, Midlothian, and today(Tuesday) she admitted embezzlement of £36,333.86 at Edinburgh Sheriff Court.

She told police she was embarrassed and now faces a month-long wait to find out her fate, after a Sheriff called for background reports.

Wales resigned from her job of 15 years when grilled over the dodgy accounts in 2007.

She joined the firm in 1992 and was promoted to the role of Customer Services Manager in 2001.

But five years later, in March 2006, she seized upon an opportunity to abuse her position.

Fiscal depute Pauline Shade said:  “A woman by the name of Mrs Drummond came into Mrs Wales’ branch and explained that her father George Clarke had died and asked if she could withdraw £500 from his account.

“This was fine, but matters came to light a year later when Mrs Drummond was finalising her father’s estate and saw there had been an additional withdrawal of £650 on the same day that the £500 was withdrawn.

“She couldn’t account for this so went back to the branch to query the transaction.”

Wales had since moved to a different Lloyds TSB branch at Cameron Toll, Edinburgh, but was called by bosses to explain what had happened.

Miss Shade said: “She said it had been a simple error and Mrs Douglas was refunded.

“But the manager was unhappy with the accused’s explanation so a full investigation commenced.”

During their search, bank staff discovered irregular activity in the account of a Mr David Hay, who was in his 70s.

Wales had set up an overdraft on his account without his knowledge and withdrew £650 to refund Mrs Drummond.

A closer investigation found Wales had been giving Mr Hay special attention as an elderly customer of her branch, often taking sums of money to his house.

But unbeknown to him, she took a total of £12,589.86 from his accounts and diverted bank statements away from his address so he wouldn’t notice.

Miss Shade said: “Mr Hay was interviewed by bank staff and said Wales had been very helpful with him, assisting in sorting his finances after he split from his wife.

“He said she would help him pay bills and on a number of occasions bring him cash up to £250 per week from his account to save him coming into his bank.

“Mr Hay was unaware that any funds had been taken from his account and didn’t discover the true extent of his accounts.

“He has since died and the bank have reimbursed his estate with the full amount taken by the accused.”

Also targeted were disabled elderly couple George and June Brown, both in their 70s.

The married couple, who live in supported accommodation had no idea they were victims of crime, as they need assistance from carers to deal with their finances.

Mrs Shade said: “They are both physically disabled and have learning difficulties so need help dealing with anything of a financial nature.

“Enquiries revealed Wales withdrew the sum without their knowledge or authorisation.

“I understand the bank have since reimbursed them.”

Even one of Wales’ own neighbours – who regarded her as a “friend” – fell victim to her crimes.

She even tried to cover her tracks in a text message to her neighbour, lying that there had been problems with statements being sent out.

Miss Shade said: “Mr Johnston was the next door neighbour of the accused and considered her to be a friend.

“Wales changed his address a number of times so that statements we redirected.

“She sent him a text saying not to worry about this as there had been a problem with statements being delivered.

“Mr Johnston had no idea that anything was wrong, but has also since been reimbursed by the bank.”

Wales was detained at her home in Brixwold Drive, Bonnyrigg, on July 24 last year.

She was taken to Dalkeith police station for interview, where she made full admissions to the embezzlements between 9 November 2004 and 30 May 2007, as well as diverting bank statements.

Miss Shade said: “She said that during the period of the offences she was under considerable financial difficulties amounting to £90,000 of credit card debts, loans and overdrafts.

“When asked what she had done with the money taken, she said she had either spent it to sustain the lifestyle which she enjoyed at the time or used it to pay towards her loans and overdrafts.

“This, she said, was an attempt to avoid exceeding her overdraft limit and incurring further charges.

“She said she was embarrassed about the state of her finances and since resigning had re-mortgaged her house and consolidated her debts.”

Wales was allowed bail by Sheriff James Scott, who called for background reports.

The Crown also lodged a proceeds of crime order in a bid to confiscate the cash, which will be considered after sentencing.