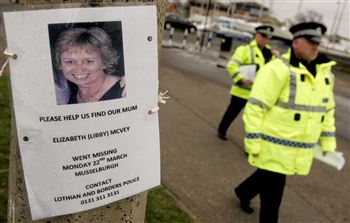 THE FAMILY of missing Scottish mum Elizabeth McVey spoke about the pain her disappearance has caused them for the first time today (Tues).

Michael and Lynsey McVey have been tirelessly joining police and other members of the community in the search for the avid church-goer – known to her friends as Libby.

Her husband said that the week since she went missing has been “awful” and her daughter called for the council worker to get in touch to let them know she’s okay.

Michael said: “She’s bright, vibrant, helpful. She always thinks of others before herself.

“She’s just full of life, great fun. She’s adventurous and loves to do things, walks, cycling, that sort of thing.

“She just generally cares about people all the time, she’s really nice.”

“On holidays, my Mum’s the person you want to be with. She’s very bubbly. You see when she’s walking, she’s always bouncing about, just a really nice person.”

Talking about the effect the disappearance has had on the family – including her son Mark – Michael said: “It’s hard to put into words. My life’s been torn out of me.

“I feel so low and I’m just trying to hold it together for the kids. It’s been awful. Really awful.

“She didn’t like fuss, even though she was out there doing things for everybody else. I just hope that she would just let us know where she is and if she feels she needs a break.”

Lynsey added that the family just want to hear that Libby is okay, adding: “I’d just like her to get someone to contact us to let us know she’s okay. That’s the main thing.

“If she can come home, that’s great, but I just need to know that she’s safe and she’s well and she’s doing okay.

“We just want somebody, if it’s mum or somebody who knows her, to give us a phone and let us know.

Libby’s family said that they knew she was well-liked in the Musselburgh area, but hadn’t realised how many people she had touched.

Michael said that the huge response from the local community had been a boost to the family.

He said: “I don’t think she’s ever realised how valuable she is and how well thought of she is.

“She always kind of thought, well, it’s just me, but you can see from the support she’s had this week, which has been absolutely overwhelming, that people love her. They’ve said that openly.

“They had a service in the church this week and they had a candlelit gathering and pauses for readings in support of Libby.

“I think she would have loved to have seen that, but would have been very embarrassed about it as well.

Libby was reported missing from her home in Eskview Road Musselburgh in the early hours of last Monday, March 22 by her family.

Police have had specialist search teams and mounted patrols out looking for the mum-of-two.

They are particularly keen to track down two people who are thought to have spoken to the council worker at around 6am on Sunday March 21 at Musselburgh Harbour.

The last time Libby was seen was around 12.30am at her home before she was reported missing by relatives seven hours later.

The 50-year-old had been wearing sky blue pyjama bottoms and a t-shirt when she was last seen, but her husband told police he was unsure if anything was missing from her wardrobe.

A police spokesman said: “We are keen for any fresh information that can help shed any light on Elizabeth’s movements in the day leading up to her disappearance, and of course any sightings of her since she went missing.

“We believe that Elizabeth may have spoken to two people who were in the area of Musselburgh Harbour early on Sunday morning, and we are keen to speak to them.

“Anyone else who has any other information that can assist our inquiries should also get in touch.”

Anyone with any information was asked to Lothian and Borders Police on 0131 311 3131 urgently.