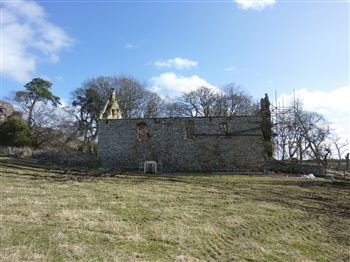 SCOTTISH tax payers have had to step in to save a historic castle from collapse after its wealthy foreign owner left it to fall into disrepair.

Skelbo Castle, which was captured by Robert the Bruce’s forces in 1308, was nearly destroyed in the severe winter weather earlier this year.

Despite trying to track down the owner, Mikhail Debouar, a friend and former special advisor to Boris Yeltsin, Historic Scotland has now had to commission emergency repairs for the “nationally important monument”.

Debouar bought the castle in 1996 and inherited the title, Baron of Skelbo, which came with it in a deal brokered by Labour peer Lord Whaddon, known for his extensive business contacts in Russia.

He paid Colditz survivor and adventure author Michael Alexander in the region of £75,000 for the title and grounds on the understanding that the site would be invested in.

At the time of the sale Alexander, who died in 2004, said: “I was assured he was even interested in building a residence at Skelbo, let alone just restoring the ruins.”

Recently Debouar’s Germany-based lawyers indicated that he would foot the bill for the repairs, but local campaigners say the castle was left to fall into further disrepair.

Now Historic Scotland has been forced to fund a £37,000 project to attempt to prevent the castle from collapsing completely.

Robin Ashby, 67, secretary of the Dornoch Heritage Society, said he has attempted to track down Debouar for years, but said after an initial promise of funding no work materialised.

He said: “His lawyers contacted me, because I had been chasing after him for years but failed to track him down.

“We had hoped, and there was some suggestion from the lawyers, that they would pay for the repairs and that the Baron would visit, but that never materialised.

“They stopped answering the phones and didn’t return emails, we don’t know why – it’s very disappointing.

“We had a meeting with Historic Scotland and they found the money from somewhere to carry out the first tier of work, the absolutely necessary repairs.

“But there is no money for the second two tiers to improve the conditions after that.”

The 13th century site near Dornoch, Sutherland, previously played a pivotal role in the events leading up to the war of independence with England.

Skelbo castle was completed at the end of the 13th century and was visited by the commissioners for the marriage of Margaret, Maid of Norway, to the future Edward II of England.

The commissioners, from both Scotland and England, were staying at the castle when they heard of the death of Margaret – considered to be Queen of Scots – in Orkney.

Their union was supposed to bring peace between the two sides, but her death sparked the events leading to the brutal war between Robert the Bruce and Edward I.

The Norman fortress style motte and bailey castle, of which just the walls now remain, was later owned by William of Sutherland in the 1500s, whose murder sparked bitter feud between warring clans in the north of Scotland.

Following the ownership of the Sutherland family, Skelbo Castle was fortified and used as a stronghold by the Jacobites throughout the first half of the 1700s after which its owner, Lord Duffus, was imprisoned in the Tower of London.

Debouar attempted to keep the property deal with former Michael Alexander, a former Scots Guards officer, secret in the run up to the 1996 Russian elections, so as not to embarrass Yeltsin, but it became public soon after the sale.

The businessman, believed to be now in his 70s, also currently owns a house in Russia and a residence in France.

Dr Allan Rutherford at Historic Scotland said that the government body had taken on the work after repeated attempts to contact Debouar failed.

He said: “We have been concerned for several years about the declining condition of the castle. In addition there has been considerable local concern.

“The castle is privately owned and we have been trying to communicate with the owner, who is believed to live abroad, about the castle.

“However, the ongoing attempts have so far proved unsuccessful despite an offer to fully grant aid emergency works. We commissioned a condition survey in 2008 which highlighted the areas of the castle which were at most risk of collapse.

“In light of this and our inability to communicate with the owner, Historic Scotland has now commissioned emergency works to ensure the continued survival of this nationally important monument.”

Work on the castle is now being carried out by Thurso-based John Munro Joinery and Building Services, who have secured the walls with scaffolding to prevent any further damage.

Dr Rutherford added: “Since the work began it has become clear that the castle has deteriorated during the winter and that a section of the 13th century curtain wall was at imminent risk of collapse.

“The emergency works will stabilise this and other sections of the castle most at risk and will give all interested parties time to decide how best to secure the castle.”