THE devastated parents of a woman whose body was found dumped in a wheelie bin have finally laid their young daughter to rest.

Catherine and Jeremy, both 47, had to endure 18 months of agony after their daughter Samantha Wright went missing while walking to her Edinburgh home in June 2008.

The 25-year-old’s body was found in the city’s Duddingston area last October after a high-profile police investigation, but her grieving parents had to wait six months before forensic investigators would release her remains.

Yesterday dozens of family and friends turned out to pay their respects to the young waitress, described as “happy and bubbly and trusting of anybody”.

A crowd of around 60 people stood silently under clear blue skies as the hearse, bearing the name Sam in flowers, brought her body to be laid to rest.

Holding back her tears at the Harwood Park Crematorium in Stevenage, Hertfordshire, her mother Catherine Gibson paid tribute to her daughter.

She said: “Samantha was so full of life and friendly, and she would make you feel good about yourself. She was so happy and bubbly and trusting of anybody.

“She got on with everybody and she would always make us laugh.

“Samantha was very well liked and everybody who knew her loved her. She made such an impact on people.

“I’m just glad we have got her back and we can finally lay her to rest. It’s been six months that we have been waiting.

“We will have somewhere to visit her. Bless her.”

Samantha’s brother, Jeff Slingsby, added: “We feel like we can pay our respects and be with her again.”

Samantha moved to the Scottish capital four years ago from her home in Herefordshire after falling in love with the city while on a short visit with her family.

She had initially worked as a waitress but later fell into a “haphazard” lifestyle.

The last sighting of her alive was on 12 June 2008 as she made her way home from the Jobcentre in the High Riggs area of the city.

She left her belongings behind at her rented flat, but boyfriend Simon Sewers, 22, thought she had moved back to England.

Her family reported her missing in February last year after she failed to get in touch at Christmas or on her birthday on January 5.

Detectives issued an urgent appeal after they discovered she had not withdrawn any cash or used her phone.

Her body was found in an overgrown garden after a major appeal by Lothian and Borders Police, which included her picture on posters and on TV screens in Edinburgh’s Waverley Station.

Yesterday her dad Jeremy Wright said the funeral had brought the pain of his loss back again, but said he was relieved that the long process is now over.

He said: “I’m just numb. I feel like it’s only just happened.

“I feel like I’m back to square one. I’m so distraught again that I can’t speak.

“But the long wait is over and at last she is home.” 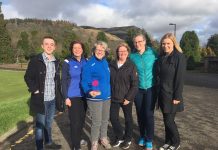