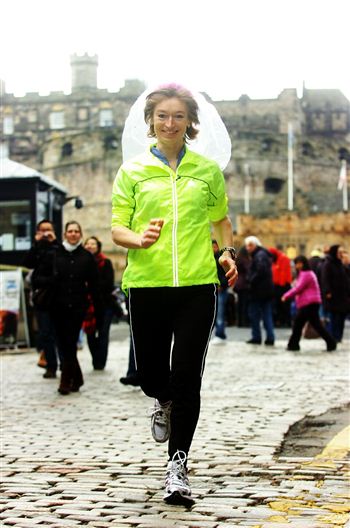 A RUNAWAY bride is to jog a gruelling 10km run on her big day – complete with 20 guests in tow.

Anna Henly and her future hubby Robin persuaded their friends and family to take part in the Bupa Great Edinburgh Run for charity just hours before the wedding.

The couple will have just two hours to get ready before they tie the knot at Edinburgh Castle later that day.

Anna, herself a wedding photographer, said it would be the perfect opportunity to raise money for Macmillan Cancer Support after brother-in-law Matthew died of cancer last year.

She said: “I always thought it would be fun to be the ‘runaway’ bride and coincide with a wedding day with the Edinburgh 10k.

“Because I have photographed at least 300 weddings, I have never got around to organising my own and wanted our wedding day to be about having fun with our friends in a very special place, rather than agonising about the perfect white dress.

“My young brother-in-law died of cancer last year, which is another reason why we decided it really was time to get married and has made me feel more grateful than ever that I am alive, living in the city I love, with the man that I love and that I can run.”

Anna admitted that some of her guests were a bit reluctant when she first suggested a bracing 6.2 mile jaunt.

She said: “Most people thought we were completely mad when I suggested it, but I can’t believe how many of them have decided to join in.

“Some have said it would be good motivation to get fit and one commented I should get married more often.”

Anna and Robin, who met 15 years ago, both studied mechanical engineering in Edinburgh and share a love of adventure and the outdoors.

The pair have completed several 10k runs and take part in the Edinburgh Rat Race every year.

Anna will be spurred on for the big day by her sister Kathy, a personal trainer who works with Chest, Heart and Stroke Scotland and who won her category in the same run several years ago.

The couple, who divide their time between Edinburgh and Norway, where Robin works as an engineer, have invited friends from across the globe, including Alaska and Singapore.

Robin said: “We do the race every year and have a bit of a party afterwards for our friends.

“This year we’ll have another reason to celebrate.

“I was surprised so many people decided to join us, but Anna can be very persuasive.”