Guilty Darren’s driving days are over after 4am smash 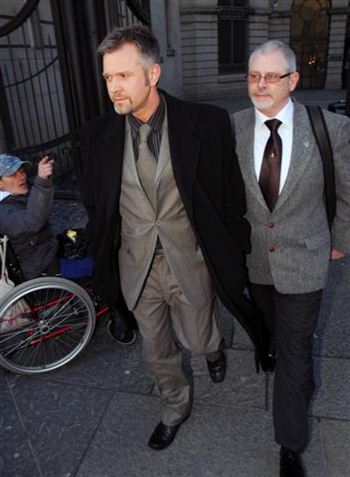 SHAMED actor Darren Day made a grovelling apology after being banned from driving for five years and fined £1250 for crashing his wife’s top of the range Mercedes whilst drunk.

After a two-day trial at Edinburgh Sheriff Court the former I’m A Celebrity star – who was yesterday found guilty of possessing a Ninja style cosh – revealed the December smash was also partly to blame for the split from his partner Stephanie Dooley.

Speaking outside court, a smartly dressed but sad looking Day said: “I am truly, deeply and sincerely sorry for what I have done.”

Day was engaged five times before wedding the ex-Emmerdale actress two years ago.

But it was revealed yesterday he has now moved to London to live alone.

His wife Dooley’s car only narrowly avoided being crushed yesterday after a lengthy consideration by Sheriff William Holligan at Edinburgh Sheriff Court.

He heard how Day had gone out drinking with fellow actors from the Queen stage show We Will Rock You on December 18 last year.

Day said he only intended to have one drink, but heard some “distressing” news from Dooley that sparked him into a drinking spree in the city’s George Street.

His lawyer Robert Fraser said: “He had received a degree of distressing news that day which I will leave between him and his wife.

“He decided to go out for a drink at the bar with the intention of having no more than one drink.

“But he was recognised after parking his car and there were some negative words said to him by certain members of the public.

“He then had three Jack Daniels which resulted in the reading he gave in a breath test.

“This incident has played a part in his separation.”

Day admitted that he had been drinking when he drove lost around Edinburgh before finally crashing into a lamppost at 4am.

Police found him to be almost twice the drink drive limit and held him in cells overnight.

Stubble-covered Day looked dishevelled during his first court appearance from the cells, but smartened up with a suit at his trial dates.

Day’s evidence got off to an embarrassing start when he was asked, “Who are you?” by prosecutor Neil Allan.

He said: “Have you ever heard the story of the sheriff asking a member of The Beatles “Who are you?”

“Well I have to confess that I had that moment when I first became aware of this case.

“But now I understand you are something of a celebrity, is that right?”

“Sometimes you might get stopped and others you don’t.”

He then admitted that pubs were the “only place” he would go between theatre shows, after being asked bluntly: “Do you like a drink?”

Day said: “I used to but I don’t anymore.

“I don’t really tend to go to the places that I did in the last three or four years.

“Like theatre bars, that is what I did over Christmas.

Day “fell out of the vehicle”

After a lengthy trial yesterday, Day was convicted of having a Kubotan key ring as an offensive weapon and details of the drink drive smash were revealed.

He had admitted the drink driving offences in an earlier appearance and had been awaiting sentence.

Prosecutor Mr Allan said: “At 3.30am the sound of a collision was heard by a lady living in Manor Place.

“A lamp post had been knocked over and Darren Day’s car was 90 degrees to the direction it should have been facing.

“He was seen to open the bonnet before getting back in and starting the engine.

“Police were called and vehicle parts including two front fog lights were found on the road.

“The airbags were activated.

“The driver then fell out of the vehicle and staggered into the hands of police.”

He was also fined a total of £1,250 for the driving offences but admonished of the weapon charge, having been found guilty.

Outside court, Day held his hands up to his “stupidity.”

He said: “I am truly, deeply and sincerely sorry for what I have done.

“I am relieved it is all over because I have got a wife and family.

“This was stupidity and again I am sorry for the distress and inconvenience this caused a lot of people.

“I just want to get on with my career now.”

The man who gave Day the Kubotan, Paul McVey, admitted he had “no idea” when told that legislation classed it as an offensive weapon.

He met Day while he was performing in the Summer Holiday musical in Blackpool in 1990.

Mr McVey, who lives in Kilmarnock, Ayrshire, said he felt guilty when he heard Day had been charged over the Kubotan.

He said: “I was shocked, amazed, disgusted and to a certain degree I felt a bit of guilt because I was the one that gave him it.

“I’ve never thought about it being an offensive weapon.

“I had no idea of Scottish legislation.

“I don’t think Darren has got an aggressive bone in his body.”

The Kubotan has the potential to kill somebody, according to PC Liam Fitzpatrick, 46, who previously gave evidence in the case.

He said: “Worst case scenario, I could kill somebody with that, absolutely.”