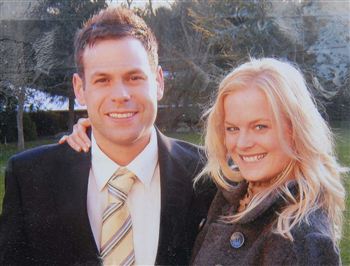 THE mother of tragic Scots fire-fighter Ewan Williamson told how she was “praying” for the victims of Tuesday’s fatal Southampton flat fire and how the tragedy had brought back her own blackest nightmares.

Linda Williamson’s brave son died rescuing 20 people from a blaze at the Balmoral bar in Edinburgh last July – the first in Lothian and Borders Fire and Rescue Service to die while on active service.

Yesterday  she described how she has been unable even to switch on her TV as news that a high rise fire had claimed the lives of two firefighters from Hampshire Fire and Rescue forced her to relive her own grief.

Linda said that she is praying for the families of James Shears, 35, and Alan Bannon, 38, who died on Tuesday evening helping to evacuate families from the 15-storey building.

Linda, from Kinross, Fife, said: “I heard on the news and someone from Lothian and Borders Fire called me this morning as well. It’s just terrible.

“When I heard it on the radio…it just takes you back to that day.

“I’ve not seen it on the television yet, I can’t face that at the moment.

“The first thing I did this morning was prayed for the families. They are the ones that have lost so deeply.

“The firefighters are so brave, they are like that, they think nothing of themselves and only of helping others.

“Every time they go out they risk their lives. They are truly courageous men.”

Linda said that the members of the fire service and their families are a close knit group, and the loss of one of their own affects everyone deeply.

She said: “It is just devastating, it just breaks you up. You need a lot of support afterwards.

“And you have to have a time of stillness after that.

“I know all too well what they [the families] are going through.

Linda added said that the support and tributes from the public had touched her deeply.

She said: “The public was just wonderful. This house was full of flowers for weeks and weeks.

“They are proud of the firefighters who serve them.”

Fire crews from Hampshire were among the 15,000 people who took to the streets in the pouring rain to pay tribute to the 35-year-old at a ceremony in Edinburgh last year.

Last night a spokeswoman for Lothian and Borders Fire and Rescue said that they would be sending a letter of condolence to the Southampton service.

She said: “Hampshire Fire and Rescue Service were very supportive to towards us when Ewan died and some of the service came to Edinburgh for his funeral last year.

“The thoughts of everyone at Lothian and Borders Fire and Rescue will be with the families and colleagues of those who lost their lives.”