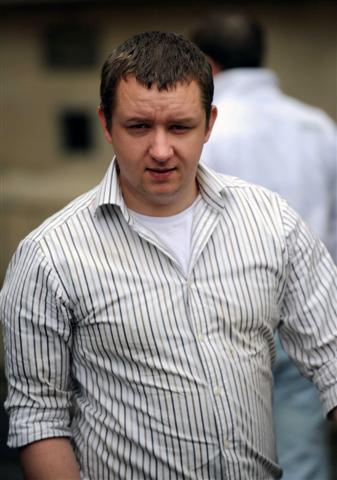 A NIGHT porter stole 15 bottles of booze worth over £7,000 from a five-star hotel shortly before handing in his resignation.

Former soldier Alan Weir, 26, used his security card to open the Prestonfield House Hotel’s wine cellar and made off with the wine and spirits.

He quit his job later that night, but was caught on CCTV and tracked down by police.

The stash discovered in Weir’s home was described by police as “the best stocked wine cellar in Dalkeith,” according to his former colleagues.

One said: “He added insult to injury by looting the best bottles of alcohol just a few hours before resigning.

“He knew there were CCTV cameras everywhere so he must have known he would get caught.

“The police found it all in his cupboard and told us they reckoned it was the best stocked wine cellar in Dalkeith, which is probably true considering the value of our drinks.”

The luxury hotel hit the headlines in 2004 when Labour peer Mike Watson was jailed for setting fire to a curtain after a heavy drinking session at the hotel, which had been hosting the Scottish Politician of the Year awards.

But on 3 January he helped himself to as many bottles as he could physically take from the historic A-listed hotel.

Weir used an electronic key card to enter the vault and then walked out with the bottles as he finished what was to be his final shift at Prestonfield.

He was charged over the theft and appeared today at Edinburgh Sheriff Court.

“He resigned on the date of the offence shortly after the commission of the theft.

“The theft came to light during a stock check three days later.

“He was easily identified as the suspect on CCTV footage and through a log check of the security system.”

When police arrived at his door, Weir showed them to the cupboard where he had been storing the bottles.

He pled guilty yesterday to a single charge of theft from a lockfast cellar.

Weir’s defence agent Angus McLennan said the former porter had been suffering financial difficulties at the time, but reserved his full explanation until sentencing next month.

Sheriff John Horsburgh allowed Weir, now of Gilmerton Dykes Avenue in Edinburgh, bail and ordered him to return to court in May to be sentenced.