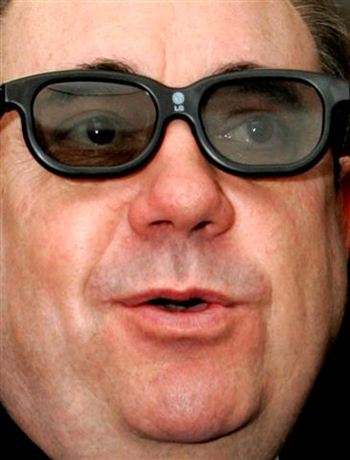 FIRST Minister Alex Salmond said yesterday (Fri) that he will be taking part in the Scottish election debate broadcast by Sky TV.

But he snubbed the two other Scottish political debates, and will instead be sending the party’s Westminster leader Angus Robertson.

The announcement was made as the SNP leader was visiting Sky’s call centre in Livingston with local candidate Lis Bardell today.

Mr Salmond has chosen the Sky debate on April 25 over those hosted by BBC Scotland and STV as it will be broadcast across the UK, not just in Scotland.

And he said that the other networks were denying Scottish viewers “a fair reflection of the major issued” and cutting the country “out of the picture”.

The 90-minute debate will be between the main party leaders in Scotland and will supplement the planned debates in London.

Mr Salmond added: “Scotland has been largely cut out of the picture when it comes to these election debates, and Scots viewers are being denied a fair reflection of the major issues – but Sky have been the most accommodating of all the broadcasters and have shown themselves willing to engage with the SNP from the start.

“That is in stark contrast to the attitude of the other main broadcasters, who have colluded in a carve-up with the London parties to shut Scotland and Wales out of the leaders’ debates. 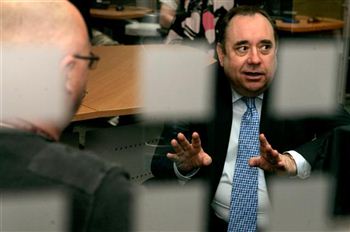 “Sky’s Scottish debate – unlike those of the other networks – is being broadcast across the whole of the UK and as such has been given a proper billing, allowing viewers everywhere to hear a real alternative to the phoney war of the London parties.

“I’m delighted to be taking part in Sky’s Scottish election debate, where I will be taking the SNP’s message offering voters an alternative to the cuts agenda of the Tories and Labour.

“Only the election of the SNP’s local and national champions will help protect vital Scottish public services from those savage London cuts.”
Mr Salmond has been very vocal in his anger about the SNP’s lack of involvement in the main leader’s debates between Gordon Brown, David Cameron and Nick Clegg.