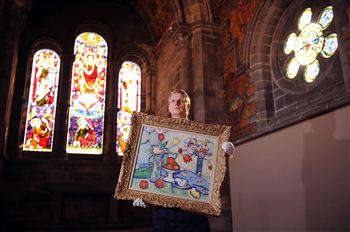 WORKS of art by some of Scotland’s most successful artists were unveiled ahead of one of the biggest British sales of the year yesterday.

The paintings, which could fetch up to £2.3million, were displayed in Edinburgh ahead of the biannual Scottish Pictures sale.

Among them is the still-life painting by Samuel John Peploe, Tulips, which could go for to £500,000 at the London auction next week.

The work is the masterpiece of Edinburgh-born colourist, who strove for decades to produce the perfect still-life painting.

Other highlights of the sale include George Leslie Hunter’s Chrysanthemums, valued at up to £300,000 and Francis Campbell Boileau Cadell’s Florian’s Café, Venice, which could go for up to £150,000.

The four artists form a group known as the Scottish Colourists, whose works of art became hugely popular in the 1910s.

The colourists were all based in Scotland, but studied and lived in Paris in the early 1900s.

Their work focuses on still-life paintings of household items, gardens and street scenes.

The Sotheby’s auction on April 22 in London will cater for bidders from across the globe, who can take part live as the works go under the hammer.

While the art market has been badly affected by the recession, experts say that the sale is expected to be a success.

They have been given confidence by the sale of Alberto Giacometti’s sculpture, which sold for a staggering £65 million on February, the highest price ever paid at auction for a single artwork.

Michael Grist, Sotheby’s Scottish pictures specialist, said: “There are people who want to put their money into art, because it’s doing very little in a bank.”

The event is linked to the Bourne Fine Art show, which will be touring in London around the same time.

It features The Shepherd by Edward Arthur Walton, valued at £95,000, Lavery’s Mrs McEwen of Marchmont and Bardrochat with her daughters, Katharine and Elizabeth, valued at £380,000.

Emily Walsh of Edinburgh-based Bourne Fine Art. “There’s still a distinction between very good and mediocre, and mediocre is not selling.”

“The market is still volatile, but it is definitely better.”

The Scottish Colourists’ work is currently being displayed to the public at Mansfield Traquair in Edinburgh today and tomorrow, before being taken to London for the auction.