Fans’ chance to party with Rankin at his 50th 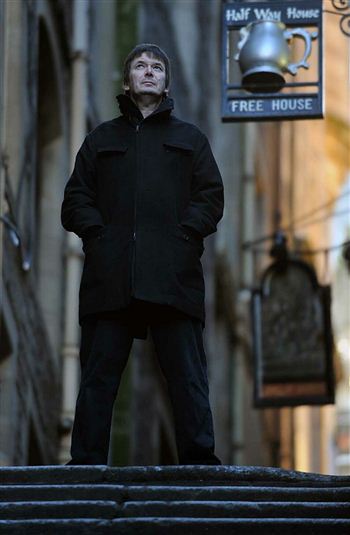 CRIME writing king Ian Rankin has booked out a library to host his 50th birthday bash – and plans to serve up free booze to his fans.

The Rebus author is inviting readers to a free party in his local library in Edinburgh where he penned some of his most famous chilling scenes.

The generous novelist is even laying on free drinks to anyone who joins in the birthday celebrations.

The event next Tuesday (April 27) will see Rankin talking about his life and work with literary agent Jenny Brown.

He said he specifically chose to hold his party at the capital’s Central Library for its role in providing inspiration for his best-selling series of crime novels.

The books’ grizzled inspector character Detective Sergeant John Rebus closes in on the library at the climax of the very first book, Knots and Crosses.

Rankin said: “Rebus was ‘born’ while I was a student in Edinburgh, during which time I haunted George IV Bridge, and especially its libraries and bookshops.

“It is no accident that I chose the Central Library for the climax of that first Rebus novel and it is a pleasure to make the return journey to celebrate my 50th birthday.”

Complementary drinks will be on offer to those lucky enough to snap up a free ticket.

Organisers at Edinburgh’s Central Library urged Rankin fans to book their place at the party early.

The best-selling author previously said he hoped 2010 would be a year-off work between books, but instead has found himself taking his book tour global.

He is due to appear at readings and literary festivals in India, Sri Lanka, Barcelona, Germany, France and Italy.