Daughters of millionaire paedophile “jumped for joy” when he died 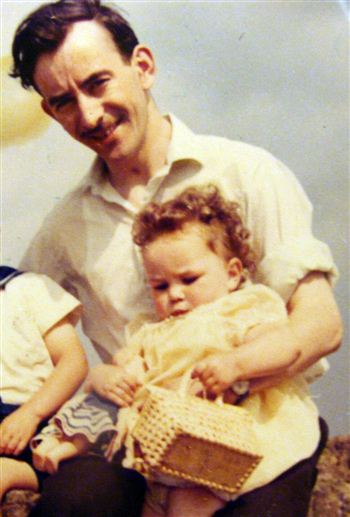 THE abused daughters of a vindictive millionaire paedophile who disinherited them in favour of the Girl Guides have told of how they “jumped for joy” when he died.

Sisters Tori Dante and Dianne Paul endured nearly 20 years of nightly rapes at the hands of their late father Reginald Forester-Smith, a celebrity photographer who was jailed for eight years after they exposed his horrific sex attacks.

He left the majority of his £1.2million estate to Girlguiding Scotland, in what his daughters feel was a sick parting shot for their role in revealing his “sex maniac” double life.

He chose to leave the cash to the Guides “in celebration of the life” of his late wife Sheena, who held Guide camps at the plush family home, the Luce Estate, in Annan, throughout the 1980s.

But her daughters, who bravely waived their anonymity as sex assault victims, say Sheena would be “furious” at the bequest to the Guides.

They revealed she was planning to divorce him shortly before losing her battle to cancer in 2001.

“His death was an even better feeling than seeing him convicted in court.

“He didn’t feel like a father, such was the level of abuse he put us through.

“Even the police was astonished at the length of time he manipulated us and everyone else.

“The truth is he loved the Guides more than my mum did and I think she would be furious if she was around today and knew he’d done this.

“She was in the process of filing for divorce when she died and would be upset to know he has done this to get back at us.

“The Guides absolutely should not take the money, due to its connection with the systematic abuse we suffered as children.”

Photographer Forester-Smith made his name in the 1970s snapping the likes of F1 champion Sir Jackie Stewart and The Queen.

Now, even after talks with his appalled daughters, the Guides are still considering taking the £416,388 which Forester-Smith’s daughters say they should have inherited.

Guides bosses refused to rule out accepting the money, while Macmillan Cancer and Cancer Research UK are still to decide whether to take the £312,291 left to each of them on the 77 year-old’s death last July.

The daughters have now put on a united front in a bid to urge the Guides to make “a moral decision” to refuse the cash.

For the first time in her life, Dianne, 51, has bravely waived her anonymity as a victim of sexual abuse to speak out about her father’s vile.

She said the Guides’ indecision over the donation left her so angry that she felt no option but to open up about her father’s evil abuse, in a move which she fears will shock even her closest friends.

She said: “I don’t see how the Guides have even got a dilemma considering he abused us in his own home where the Guide camps took place.

“It’s complete rubbish that he left it in memory of Sheena’s role with the Guides.

“It is a direct attack on the family; his malicious last gesture to us and nothing to do with his kindness, admiration to the Guides or his wife.

“If anything, it is a “thanks” to the Guides because when Sheena was away doing her camps, that was when he would rape us.

“That’s not somebody who loved his wife.

“He was a sex maniac who used us and I’ve not been myself since.

“I’ve never slept for a full night since and I hear every little sound as a result of years of lying there in the dark as a little girl, knowing he was going to come to my room.

“It has brought Tori and I really close together.

“People call us victims but we see ourselves as survivors.”

After being called a liar in court by her own father during his trial at the High Court in Edinburgh in 1999, Dianne, a council worker who lives in West Lothian, said being “disinherited” from his will was the final straw.

She said: “The Guides need to make a moral decision and refuse it.

“I just feel so strongly about it that I’ve waived my anonymity to be united with Tori in this once again.

“We got through a horrendous court case together where we had to give evidence, and now we are supporting each other again.

“There will be friends who will be really shocked when this comes out but I feel too strongly about it just to hide away.

“I want to cast away any doubts that he was a good guy because disinheriting the children he raped is a purely vicious attack on us.”

Addictions counsellor Tori, who lives in Manchester has also revealed her fury that the Guides were considering the will.

She wrote a book while her dad was in prison, detailing how he robbed her, Dianne and another girl of their childhoods.

She said last night: “Leaving the money to the Guides is Reg having his last say.

“We have no issue with the cancer charities.

“Being left out completely is not a surprise, in fact it sums how much he hated us and should never have had children.

“Once again he has twisted the knife.”

“As an organisation that cares about people, Girlguiding Scotland would like to respect the privacy of all parties and will continue any further communications in private.

Amanda Bringans, the director of fundraising at MacMillan Cancer Support said: “We are currently looking into this legacy and liaising with the executors.”

A spokesperson for Cancer Research UK said: “We are liaising with the executors of the estate in question at the moment so we are not yet able to say what the outcome of this will be.”

Panic in Asda as shopper announces “paedophile on the loose”