The 35-year-old had been with Lothian and Borders Fire and Rescue Service for seven years when he died rescuing people from a blaze at the Balmoral Bar on Dalry Road in Edinburgh last July.

Although around 20 people were evacuated from the building, Ewan tragically lost his life – the first Edinburgh based firefighter to die whilst battling a blaze in living memory.

And now the service has dedicated a lasting tribute to a “wonderful individual” and “courageous firefighter”.

Family and friends were joined by members of Green Watch – who worked with Ewan – and the Lord Provost of Edinburgh, as well as Fiona Hyslop MSP to pay tribute to the tragic firefighter.

It followed a short service where Ewan was remembered by his colleagues and the people of Scotland.

Linda said that the plaque was a “permanent reminder” of her son’s sacrifice.

Speaking about Ewan earlier this month, she said: “Ewan was joy and smiles, laughter and fun and had a passion for life and his work.

“We are so proud of him and the love and happiness he gave to us all.

“He will never be forgotten and the plaque will serve as a permanent reminder to his ultimate sacrifice.

“The firefighters are so brave; they think nothing of themselves and only of helping others.

“Every time they go out they risk their lives. They are truly courageous men. 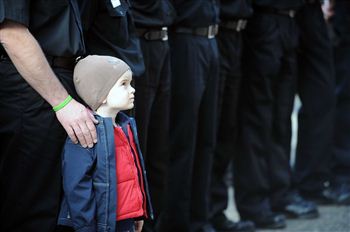 Speaking after the service, Chief Fire Officer Brian Alloway said he was proud of his force after the loss of a “wonderful individual”.

He said: “I think morale has been dented by Ewan’s loss, however I am particularly proud of the fact that they have continued to do their duty in carrying out rescues in the way they public have become to expect of us.

“Ewan was a wonderful individual he was friendly, he was outgoing, he was a professional and most importantly, he was courageous.

“I think it is absolutely necessary that as a service we recognise the sacrifice that from time to time we have to make in protecting members of the public and it is extremely important to us that we have a lasting memorial to Ewan.”

Reverend Alan Reid from Kinross Parish Church led prayers for Ewan and for other firefighters who have lost their lives in the line of duty.

Lord Provost George Grubb spoke of behalf of the people of Edinburgh.

He said: “It is a great honour to be here and represent the people of Edinburgh.

“Ewan paid the ultimate sacrifice in the course of his duty. He answered and responded to the needs of the people of the community and it was that response that claimed his life.

“He will not be forgotten by his crew, by the whole of the fire service in the United Kingdom, or by the people of Edinburgh.

“Ewan the firefighter was a part of the city and his dedication to duty becomes part of the Edinburgh story.

“Our gratitude to him will be remembered in the years to come and our sympathy to his loss goes to his family in the days that lie ahead.”

And Fiona Hyslop, the MSP for the Lothians, paid tribute to the tragic firefighter on behalf of the Scottish Government and the people of Scotland.

She said: “Ewan was not just a firefighter. He was a son, a brother, a partner and a friend.

“The tragic events when Ewan and his colleagues fought the fire at the Balmoral Bar will be remembered by us all.

“I believe this is a fitting and lasting tribute to Ewan and to the sacrifice that he made and I believe the people of Scotland will always remember Ewan as someone they could turn to in their time of need.”