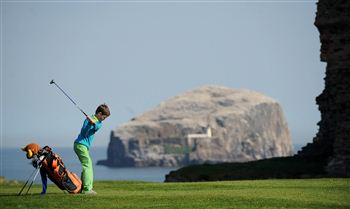 ORGANISERS of the UK’s biggest golf tournament of the year are preparing to stage the huge event this summer – and it isn’t the St Andrews Open.

The US Kids Golf European Championship is to attract almost 500 budding young golf stars from across the globe.

The three-day tournament, held in four historic courses across East Lothian, is the largest single-field event to be held in the UK.

Around four times the number of players are set to compete in the event, held on June 1st-3rd, than in the Open Championship.

Dan Van Horn, founder of US Kids Golf, said: “We’re looking forward to once again staging the US Kids Golf European Championship in Scotland. With a field of more than 450 competitors, it will be the biggest tournament taking place in the UK in 2010 – even surpassing The Open Championships.

“Many of the players at the European Championship are already rising stars of the game and the standard of golf at the tournament is always extremely high. All of these youngsters will be going on to become at the very least competent golfers, but possibly even the Rory McIlroy’s of tomorrow.

“We’re also very pleased that, despite the ongoing challenging economic conditions, there are still youngsters from around the world who are making the trip to Scotland for this year’s tournament. It means that we will have another multicultural event that will help promote the game of golf and nurture the next generation of players.”

Tournament co-ordinator Alasdair Good, head professional at Gullane Golf Club, said that among the young contestants will be Major-winners of the future.

He said: “2010 is a big year for golf in Scotland, especially with the Open Championship taking place at St Andrews.

”However, in terms of the overall number of entrants, the US ids Golf European Championship will actually be the biggest tournament taking place in Scotland – and the rest of the UK – this year.

“We’re going to see some of the world’s best young golfers in action over four days and the standard will be exceptionally high.

“I’ve no doubt that we could even see a few Major winners of the future among the field of competitors and I’ll guarantee no one will be disappointed at the golf they will see.”