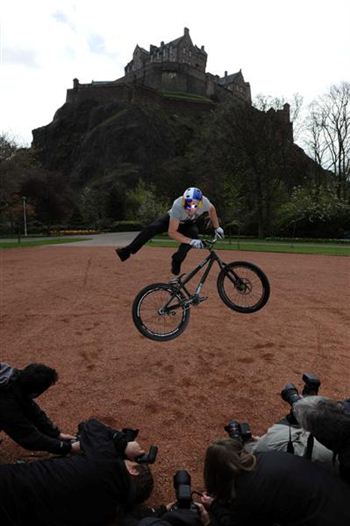 SCOTTISH stunt biking king of the castle Danny MacAskill is planning a surprise move to Spain.

The fearless rider became an internet sensation last year when a video of him leaping over Edinburgh’s landmarks racked up over 17 million hits on YouTube.

But now the 23 year-old says he has conquered all the obstacles Scotland’s capital has to throw at him, and is eyeing up a move to Barcelona.

He says the stunning architecture in the Spanish city would be a perfect setting for his spectacular bike tricks.

He said: “I’ve been in Edinburgh four years and done everything I wanted to do here, so if I want to keep progressing I need to look further afield.”

MacAskill, who has featured in a car commercial and music video since finding fame, revealed his travel plans today (Thursday) at the launch of a motorbike event.

He is set to display his skills at the start of the Motorbike Trial World Championship at Fort William in June.

Even though he has nothing to do with motorsport, the Skye-born rider was more than happy to show off his skills in the shadow of Edinburgh Castle.

And he was thrilled to team up with one of his childhood heroes, 12-time motorbike trials world champion Dougie Lampkin.

MacAskill told of how he used to watch Lampkin, 34, on television as a young boy. 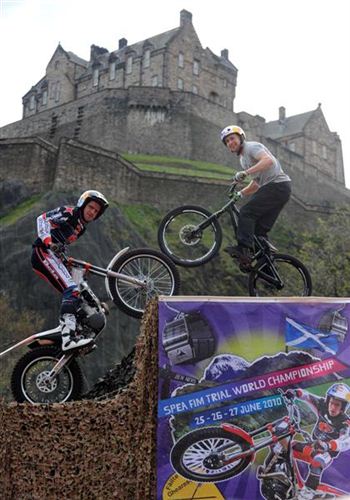 He said: “It’s pretty wild to be here today doing a photoshoot with Dougie because I used to watch him on Eurosport when I was wee.

“Even though I’m a pedal guy and he’s a motor guy, we use the same skills like balance to fling our bikes and bodies about.

“Seeing him in real life is unbelievable.”

MacAskill’s skills have taken him to Abu Dhabi, Germany, France and Spain in the past year.

But in considering his next move, he said America is out of the question because of bad memories with recent injuries.

He said: “I’ve got no intentions of moving to America; hopefully just Spain for the winter.

“I’ve been out to America twice and each time I’ve broken my collar bone.

“The last time I was out in California training it was great fun but again I got injured, so it’s a dangerous place.

“I’ve been in Edinburgh the last four years now and riding-wise I feel like I’ve done everything.

“In that video I did everything I could find in the city centre, so I’m thinking maybe next winter I might move to Spain.

“Barcelona has a real different kind of architecture and has great weather.

“I’m used to moving a lot though, because I moved from Skye to Aviemore and now Edinburgh.

“I’ll always love Edinburgh, it’s just riding wise if I want to progress then I need to make a move.”

Looking ahead to the World Championships at Ben Nevis – where 8,000 spectators are expected – Yorkshireman Lampkin said Scotland was his favourite place to ride.

He said: “Fort William is a world class stage for riding and easily the biggest event of the year for me.

“The Nevis range is incredible and really is the outdoor capital of the UK.

“It would be a great stage for me to win my 100th title in front of my home fans.”