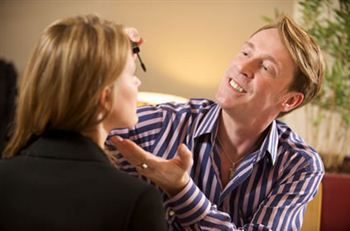 ONE of Hollywood’s top make-up artists is setting up shop in Scotland.

Graham Johnston is used to touching-up the looks of the Brad Pitt, Catherine Zeta Jones and Russell Crowe.

But now ordinary Scots will be able to benefit from his A-list techniques for a short time only at his temporary berth in Edinburgh.

He will spend three months in the city while between shoots, the same location which gave him his big break working on home grown budget films including Trainspotting and Shallow Grave.

His temporary home will be at David Calder Studio in William Street South West Lane where he will charge £100 an hour.

All a long way away from where he began his incredible career fitting a string vest on Rab C Nesbitt more than 20 years ago.

The 38-year-old cut his teeth on the BBC Scotland hit comedy along with low-budget Scottish film dramas.

And the Glasgow-born artist was soon putting blusher on Bridget Jones and blood on Russell Crowe for the Ridley Scott epic Gladiator, before moving onto hit flicks like Spy Game.

Graham is now back in Scotland and is to offer makeover tips to the fashion-conscious ladies of Edinburgh between now and his next production in August.

But after all his success Graham says it’s hard to imagine he started his career on the streets of Govan with Gregor Fisher.

He said: “It seems like a long time ago. I was a trainee at BBC Scotland and I worked on film dramas then as well. I was on Rab C Nesbitt for a while – quite different to what I do these days I suppose.

“I got my big break on films like Shallow Grave, and I do miss some of the gritty Scottish thrillers that I’ve done in the past.

“I’m just back from Berlin after working on Unknown White Male with Liam Neeson. It’s a great stylish thriller, it reminded me a bit of those early Scottish ones.”

Prior to that Graham was working on Eagle of the Ninth, the Scots-Roman epic that has been tipped as the next Braveheart, starring Billy Elliot star Jamie Bell, Kick-Ass star Mark Strong and directed by Last King of Scotland’s Kevin Macdonald .

He said: “Eagle was great because we had a pretty loose historic brief, so we were able to come up with the tribal styles and be really creative. It’s a great production.

“Filming in Unknown White Male was quite sedate after doing blood and guts and gaping war wounds on Eagle of the Ninth.

“It’s a proper epic though, I think it will be big when it’s out.”

Despite working with controversial stars like Russell Crowe, Graham says he has to stay tight lipped about their personal lives – until he retires and writes his autobiography.

He said: “All I can say is that he can be very charming. We were on set and he found out it was my birthday and put on a huge birthday lunch.

“It was incredibly nice of him.”

“Also Catherine Zeta-Jones is absolutely great. She comes from a theatre background, so she’s a proper trooper.

“But as for the others, I’ll have to wait until I retire and then I can reveal all.”

Graham added that he’s more than happy to be back among his friends and family, and reckons he can bring out the star in everyone, while consulting at David Calder’s studio in Edinburgh.

He said: “It’s great to be back here. As a make-up artist you lead this nomadic lifestyle of going from production to production, I’ve always enjoyed it, but it’s nice to settle for a while at least.”

“I’ll be helping people try to find a style when it comes to their make-up.

“It’s like finding a style for a character in a production.

“Everyone can look fabulous, hopefully I can bring a bit of glamour to the ladies of Edinburgh.

“When you work in movies it’s about getting across their character, and it’s the same with everyone.

“I really enjoy the connection between the two.”

Gordon Ramsay reacts to “female” version of himself