Deadline reporter PAUL THORNTON joined SNP leader Alex Salmond for an interview on the campaign trail during his journey between Edinburgh and Glasgow as the countdown to polling continues.

THE SNP has warned that Scotland is on track to be dragged back into a Thatcher like era even if the Tories fail to win any seats north of the Border.

During a coast to coast rail journey between Edinburgh and Glasgow, Nats leader Alex Salmond said only the prospect of a hung Parliament through voting for his party could stop that from happening.

Mr Salmond said: “We are now certain that there are only two possible outcomes to this election.

“One is a balanced Parliament.

“But we also have to look at the possibility that there is a Tory government.

“We are hoping for a balanced Parliament because that would allow for a strong block of SNP and Plaid Cymru, a Celtic block to get success for Scotland.

“David Cameron has refused to answer the question whether he is going to tear up the funding formula and have a special Scottish cut in addition to all the other spending cuts.

“It is an incredible claim by the Conservatives that even if they get no MPs at all in Scotland they will rule the country on the back of anyone who votes Liberal or Labour.

“That is what Margaret Thatcher used to do in the 80s and David Cameron seems to want to take us back to the 1980s. 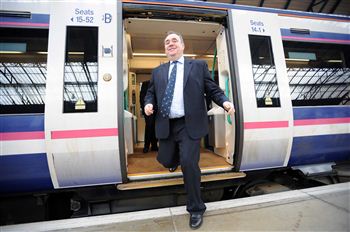 “What we have got from Labour now, it looks like the last desperate throw of the dice, if they had said this at the start of the campaign then there might have been some logic to it but now in the last few days it looks like ‘oh dear, we are getting beat what can we think of to try to prop up our position?’.

“The experience of a balanced Parliament we have is very useful.

“We co-operated with the Tories on policing and with Labour on getting 20,000 more apprenticeships this year.

“What we have demonstrated is that if you are prepared to put forward reasonable proposals then you can gather support.

“We have achieved 65 out of 94 head line manifesto promises in three years. I think that is a great record.

“Obviously we have not been able to get them all done, in a balanced parliament there has to be some give and take.

“What I am worried about is that with the Conservatives it would be all take.

“And not content with stealing Scotland’s cash, Mr Cameron also plans to steal the votes of other parties by counting Labour and Lib Dem votes towards a Tory mandate in Scotland.

“The Conservatives know that they are going nowhere in Scotland with their support flat-lining in the polls – that’s why they want to take all non-SNP votes here as counting towards their right to rule north of the border.

“People thinking of voting Labour and Lib Dem should bear that in mind before they go to the polls – a vote for either of those parties will be counted as justifying a Tory Government’s mandate in Scotland even if the Conservatives have no MPs here.

“Labour are finished while Nick Clegg is preparing to do a deal to get into bed with the Tories, which means votes for the Lib Dems and Labour in Scotland are wasted.

“A balanced parliament would benefit the relationship between the Scottish and UK governments because nobody could be ignored.”

The First Minister spoke as he made a train journey through the Central Belt, stopping to rally support in key seats the SNP hope to wrestle from Labour in Thursday’s election.

He met with Nationalist candidates in Edinburgh, Linlithgow, Falkirk and Glasgow taking time to speak with voters, and answer their questions.

Mr Salmond’s day began at 10.15am when he strode onto platform eight at Waverley Station to a swarm of press and SNP activists. He met with two Edinburgh candidates George Kerevan and Sandy Howat.

The First Minister did interviews with members of the media and took time to make a donation to a Red Cross charity worker before being whisked off, leaving on the 10.44am service to Linlithgow – settling down on the train with a bottle of Irn Bru.

In Linlithgow he met with local hopeful Tam Smith before going door to door in the Springfield area of his hometown.

Although given a warm reception at most doors, some voters were still undecided, while others stuck with tradition in the Labour stronghold where – it is claimed – an SNP blogger leaked the results of the postal ballot.

One local SNP activist admitted: “We are not supposed to talk about that, but basically it looks like the seat is going to be really tight.

“We have been told by lots of people that they are still undecided, so between those people and those who don’t come out to vote, there could be a big swing.”

Local mum-of-two Maureen Aitken, 41, spoke with the First Minister on her doorstep.

Afterwards she said: “He was really nice, lovely. But I have decided that I am going to vote Labour.

“He was just asking about my kids really, nothing to do with politics. I have nothing against the SNP, it is just what I was brought up with.”

Mr Salmond grabbed the 12.03 service to Falkirk High Station before making his way into the town centre and signing Saltires and SNP flags for youngsters.

After meeting the First Minister with daughter Morgan, Michelle Hardy, 34, said: “I probably will vote SNP. He was quite nice and said Morgan had big eyes.”

Mr Salmond spent around an hour speaking to local at the Howgate shopping centre in the middle of the town and made the 1.44pm service to Glasgow with just seconds to spare.

On the train Mr Salmond had a cup of tea – one sugar, milk – and a fruit cake, hurtling towards more glad-handing in Glasgow.

But it will be another 48 hours of stirring before he knows if his Party’s tea’s oot or not for this campaign.