Staff at Edinburgh Airport faced a race against the clock to get as many flights as possible airborne today before being forced to close the gates because of  volcanic ash drifting in from Iceland. Reporter CARA SULIEMAN and photographer KATIELEE ARROWSMITH were at the airport to speak to some of those affected.

A STRANDED Scots family thought someone must be taking the ‘Mickey’ after they were turned away from not one but two airports as they tried to reach Paris.

Matt Cooke, 37, and wife Catherine, 40, were supposed to fly from Glasgow Airport on a trip to EuroDisney with daughter Rachel, five.

After learning that their initial Easyjet flight was cancelled because of volcanic ash overhead, they instead travelled to Edinburgh Airport to catch an alternative.

But having checked their bags on it wasn’t until they got to security that they found the 1.10pm flight to Paris had also just been cancelled by the freak conditions brought on by Iceland’s volcano.

Engineering manager Matt, from Glasgow, said: “We’re trying to get to EuroDisney. 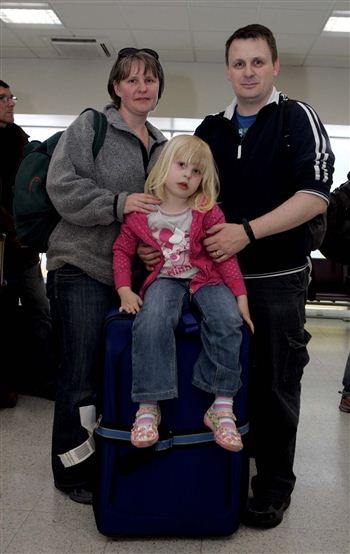 “We were supposed to be going from Glasgow but that was cancelled so we came through here.

“We thought we’d managed to get a flight but they just announced over the tannoy that it wasn’t going.

“We were literally about to go through security when we heard.

“We’ve collected our bags and just have to wait and see now.”He added: “Rachel was looking forward to going to EuroDisney but it looks like we’re not going now.

“Hopefully we’ll get out tomorrow morning from Glasgow but it depends on this ash.

“There’s not much we can do about it but it doesn’t make it any less disappointing for Rachel.”

Other passengers were equally unlucky including group of OAPs who found their holiday scrapped for a second time.

Duncan and Sheena Baillie and friend Marion Burns, 71, from Edinburgh, were all scheduled to fly out to New York on April 17 but the ash stopped them from going on the holiday.

They had rebooked for today (Weds) but their break was cancelled for a second time.

Marion, 71 explained: “We were due to go out last month but couldn’t because of the volcanic ash.

“We’re trying to rebook again, maybe for tomorrow or later on.

“If we go tomorrow then we’ll get one less day there and it’s a long way to go for four nights.

“Everyone has been really helpful. There’s nothing anyone can do about it.”?

Duncan, 79, added: “The thing is that we’ve booked car hire and hotel at the other end and we’ll lose the money on them.

“We had problems trying to get two rooms for this date so we might not be able to get accommodation if we have to rebook it for a later date.

“There’s no point in getting in a stoosh about it, there’s nothing nobody can do.

“It’s just a shame that we’ve not made it this time.”?

As flights at Edinburgh were finally grounded at 1pm  airlines and travel agents laid on alternative transport to try and get people to their final destination.

David McMahon, 45, and Karen McDade, 45, had travelled through from Hamilton, Lanarkshire, to go on a package holiday to Egypt.

But instead of jetting off to Sharm-el-Sheikh with Thomson they were stuck at Edinburgh waiting for a coach to take them to Newcastle where they hoped to finally take off.

Karen said: “We actually chose to fly from Edinburgh instead of Glasgow because the flight times are better.

“When we got up this morning and heard Glasgow was shut we thought we’d made the right decision.

“But now we’ve been told to wait for a bus to Newcastle.

“They can’t even guarantee that we’ll be able to get a flight out from there. So we could be stuck in Newcastle tonight.”

David added: “We’ve had no information from them at all. They just told us to wait here for an announcement.

“We can delay it by a day but anymore than that and we’ll have to cancel it. Luckily it’s a package holiday so we’ll get the money back.”

And passengers with KLM who were due to fly in to Glasgow had been diverted to the capital.

Coaches were put on to get them across the country.

Among the hundreds of passengers boarding the buses was American Jeremy Lamont, 29, from Utah.

Having flown in to Amsterdam he had been transferred to an Edinburgh bound plane.

He said: “When my Glasgow flight was cancelled I was moved to this one for no extra cost.

“The airline have been very good. I don’t know where in Glasgow the bus is taking us but I don’t care – I’ll be a lot closer to my destination than I am now.”

Also getting on the coach was Carrie Tierney, 46, from Kingston in London.

She said: “It’s really good of them to organise buses. My only complaint is that they knew this morning that Glasgow was shut but didn’t cancel it until the last minute.

“A cup of tea would have been nice as well. But at least we’re on our way now.”

A FEW lucky few passengers did manage to catch the last flights out of Scotland at Edinburgh.

Three men who boarded one of the last flights out of Scotland only just managed to get on to the KLM service to Amsterdam after their original Ryanair flight had been cancelled.

The Christmas tree producers were on business in Scotland and were due to fly back to their home country with low-cost airlines Ryanair.

But they booked themselves on to two flights from Edinburgh to Denmark via Amsterdam.

Jimmi said: “We suspected last night that our flight would be cancelled and when we woke up in the morning we found that it had been.

“We have managed to find another way home but it has cost £1,000 for the three of us. It is a lot of money but we need to get back.

“We are relieved to be able to get out, and we’ve just made it. The airport will close just after we take off.

“Hopefully it will be okay when we get to Amsterdam and we will be able to get home. Once we are on the continent then it will be easy to get home.”?

Equally lucky was John Reid, 49, who caught an early flight to London Heathrow yesterday (Weds) morning in time to make his connecting flight.

Initially booked on to a cancelled British Airways flight, he got a seat on a BMI flight at the last minute.

John, from Dunfermline, Fife, said: “I’m going to Geneva on business through Heathrow.

“BA cancelled their flights to Heathrow but said they could take me to Gatwick but that?s no use as my connecting flight leaves from Heathrow.

“I chose to pay extra and change my flight. I don’t understand why BMI were able to take me but BA weren’t. 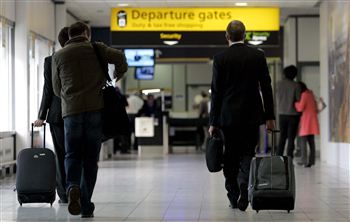 “I’m just thankful that I’m getting there we’ll have to see if I make it back again.

“I’m not angry about the circumstances, they can’t do anything about the ash.

“But the airline haven’t been very helpful and are giving absolutely no information out.

“If I hadn’t had help from my brother I wouldn’t be going anywhere just now.”?

Other passengers took advantage of Edinburgh Airport being open this morning by using it as a way into Scotland.

Dave Murphy from Bristol was supposed to fly up to Glasgow from his hometown yesterday (Weds) morning.

But with Glasgow Airport shut he had to jump on a plane bound for Edinburgh before getting a taxi across the country with a fellow passenger.

The 41-year-old said: “I’ve come up to Glasgow to see a friend and decided to get this flight after that one was cancelled.

“The airline have been brilliant, helping us sort out a taxi across to Glasgow and trying to get us there as soon as they can.

“I don’t mind if I don’t get back as it’ll mean a few extra days holiday and days off work.”?