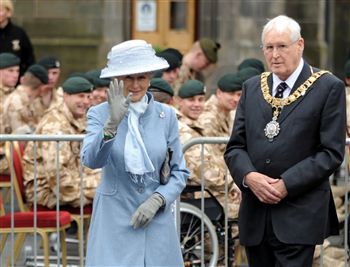 INJURED soldiers were given a Royal welcome home from their bloodiest tour of duty in 50 years today.

In an emotional parade of heroes, the 3 Rifles battlegroup marched down Edinburgh’s Royal Mile – short of 30 men who were killed during a six-month deployment in Helmand Province, Afghanistan.

The battle scars and conflict injuries sustained by many of the company were clear for the thousands lining the streets to see.

HRH Princess Alexandra took a salute from the Riflemen before meeting wheelchair-bound soldiers who were unable to march, some of whom lost limbs fighting the Taliban in the Sangin area of Helmand.

In her roll as the Rifles Royal Colonel, she later met some of the bereaved families who had gathered at Holyrood Palace for a private gathering. 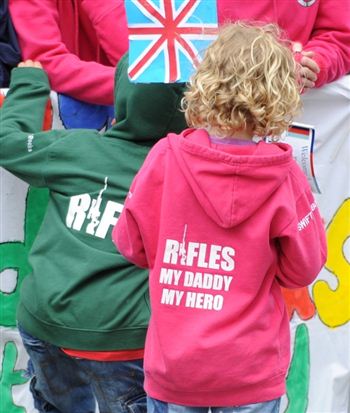 The death toll among the ranks of 3rd Battalion The Rifles and B Company of The Royal Scots Borderers is the heaviest suffered by a British army battlegroup since the Korean war.

A “true Band of Brothers” spirit kept the group together, according to Major Mike Lynch, 35, who was in command of 137 men, from gunners to chefs, at the Kajaki dam, which provides power to Helmand.

“They have made the ultimate sacrifice”

He said: “Our key role was to provide security at the dam, which is the effectively the life-source for the Afghan people in the provincial capital.

“We were very fortunate that the battalion we took over from was 2 Rifles, who made us aware of what the threats and risks were before we went out.

“We did manage to have a Christmas because the public across the UK sent us some fantastic parcels, which is a spirit booster.

“As someone with a family that six months moves very slowly.

“What gets people through is that feeling not to let your comrades down.

“Whilst there are guys who have just turned 18, on the ground they have been fantastic.

“They work hard for each other and refuse to let their friends down.

“That’s what gets them through – a true Band of Brothers approach. 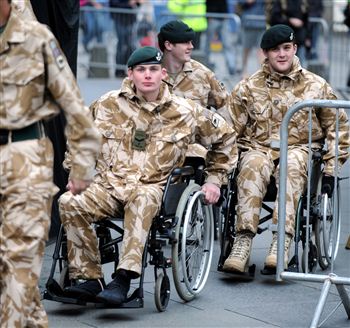 “It’s a very difficult situation holding a heroes parade today for the enormous success and progress we have made when 30 of our good men are not here.

“They have made the ultimate sacrifice and they are all heroes.

“When we join the Army we do understand what we are joining, but it doesn’t make it any easier when a family loses a loved one.”

“Many people are touched by this”

Cash donations were collected during the parade by volunteers for the Mark Wright Project, dedicated to providing support and services to help ex-service members in overcoming post conflict issues.

The Dalkeith-based project was set up in memory of the young paratrooper killed in Iraq.

Mark was posthumously awarded the George Cross for bravery in entering a minefield to try and save the lives of his comrades.

The project’s director Nancy Campbell said: “The whole concept behind the homecoming parade is looking for community support and to give support to the bereaved families and those who have been injured.

“This is a huge recruiting area for the forces and many people are touched by this in some way.

“I think people will genuinely want to come out and support the homecoming.

“The event itself is also an opportunity for the community to express its gratitude to the men and women on the frontline in Afghanistan who have suffered the most.

“Attending a battalion’s welcome home parade is a simple, yet practical, way of letting them, and their family members know that their communities respect, care and support them.”