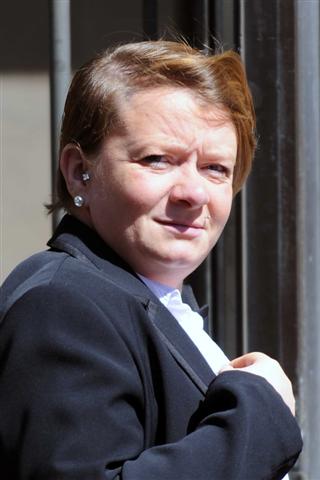 A PSYCHIC medium has told of how she was “terrorised” into a £16,000 bank scam by a gang of Asian men who threatened to kill her children if she refused.

Lynne MacNeill, 41, said she was forced to front a plot to get huge loans using fake ID after a clairvoyant session went wrong.

She said a reading that started “friendly and full of banter” ended in “my worst nightmares” when she realised she was working for a criminal Glasgow gang.

She wept at Edinburgh Sheriff Court today as she was spared jail and instead ordered to carry out community service having admitted to being “roped in” to committing fraud.

MacNeill pled guilty to obtaining £5,000 by fraud and attempting to obtain £11,000 by inducing Edinburgh Natwest bank staff to process a loan.

The Glasgow mum of three, who has now given up her “Vampire Romance” business, said she had no idea she had been doing readings for girlfriends of hardened criminals.

She said: “It started off like any other reading, friendly and full of banter.

“I mentioned in passing that I was in debt and basically their boyfriends pounced on that.

“I did agree to it at first, but when I tried to walk away they basically hounded and terrorised me with threats saying they were going to come and kill my children.”

MacNeill admitted she was tempted to take the £1,200 offered to her because she was in so much debt.

The three men, who she only knew by their first names, gave her a false identity card and answers to security questions in order to take £5,000 out of a bank account.

The first transaction on 18 June was successful, but a second attempt on 24 June failed when bank staff became suspicious.

Fiscal depute Bruce Macrossan told court previously: “She entered the Natwest Bank on George Street, Edinburgh and sought to make a withdrawal of £5,000.

“She claimed that she required this sum of money in order to pay for a funeral.”

The cash was handed over in £50 notes once MacNeill answered security questions and produced a driving licence that matched the account holder’s name.

But when she returned to try to take out £11,000 using the same ID just six days later, police were called in and MacNeill was arrested as she left the bank.

“Your children will be at risk”

She gave full admissions to police about the fraud scheme during an interview at St Leonard’s police station.

Her defence agent Tony McGlennan told Sheriff Derrick McIntyre: “She basically became involved in events which were not made explicit to her at the time.

“She had intimated to them that she had debt difficulties and she agreed to become involved in fraudulent activities.

“But she quickly made it clear to these men she was not prepared to carry on.

“However the attitude they took was “you will and you will give us some cash reward for it and if you do not then your welfare and the lives of your children will be put at risk because we know where you live.””

Police took £850 from MacNeill’s home in a search and she was ordered yesterday to pay the bank £750 in compensation.

Sheriff McIntyre told her: “In view of your co-operation with the police I am prepared to give you community service as a direct alternative to custody.

“You should be careful of the company you keep.

“That is what happens when you associate with these kinds of people.”

Outside court, MacNeill said she was relieved the sheriff acknowledged how she had assisted police, who are now understood to be making further inquiries on the three men who threatened her.

But she said she believes she has suffered repercussions already as a result.

She said: “I gave police the three mens’ names and I know this could have ended up a lot worse.

“But in July I had my windows broken and that is not nice when you are trying to move on.

“I spent about 12 hours in police cells over this whole thing which really is my worst nightmare.

“I made it clear from the start to these girls that I was quite a bit, you know, in debt and that’s what came back to get me.

“I felt awful being roped in like that, because I was vulnerable.”

MacNeill, of Croftend Avenue in Glasgow, has been given a year to carry out her 180-hour community service order.