Ex-PM Brown still the boss, as he sends wife to Tesco 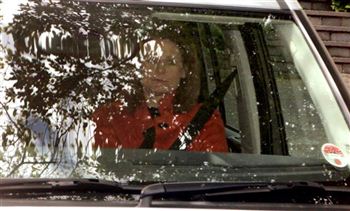 AFTER his very public departure from high office, it was perhaps of little surprise that Gordon Brown would chose to keep a low profile on what was his first day back as a jobbing MP.

Back in his beloved Fife, at the North Queensferry home where his children no doubt were enthused as to how daddy suddenly had so much free time, the former Prime Minister stayed behind closed doors.

It was his wife Sarah, a rock to him these past few tumultuous days, who was to run the gauntlet of photographers, TV crews and reporters camped at the end of their driveway.

Accompanied by their permanent security detail, she went only as far as Tesco.

But there was no need to ponder over whether it was an official endorsement of not for their refusal to back the Conservatives business pledge over Labour’s planned National Insurance increase.

It was much, much simpler than that.

A wife, a mother, going shopping for an hour. As near as normal an act as this family is likely to get these days. 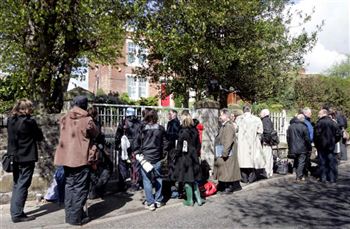 But yesterday was never going to be a normal day.

While David Cameron and Nick Clegg traded jokes like comedians on the Downing Street lawn, Mr Brown stayed inside the property as well-wishers were stopped at the gates attempting dropping off gifts and letters to the family.

A delivery driver in a red van arrived to drop off flowers for Sarah Brown.

But the life of a Prime Minister and their family can never truly be the same again and police officers outside the sandstone property took his details before sending him on his way without delivering the blooms.

Later an older woman dressed in a stripy top attempted to drop off a card for the family. Again, officers took down her details and sent her home still clutching the card, and whatever its contents.

Yet out in his constituency, those who not only returned Mr Brown as their sitting MP but helped Scotland deliver a message to the rest of the Con Dem nation, locals spoke out in support of the son of the Manse.

Shoppers in nearby Kirkcaldy – the town where Mr Brown grew up – said they were still 100 per cent behind their representative.

Pat Moir, 62, who lives in the town, would have preferred it if Brown had stayed on.

She said: “I wasn’t very happy when Gordon Brown stood down.

“He should stay on as MP – he’s doing a good job for the town. I voted for Brown and definitely want him to stay on.

“It would be best for Britain if he was still the Prime Minister but we’ll just have to see what David Cameron does.”

Sean Martin, 64, a hotel manager from Kirkcaldy, also said that Gordon Brown has done a lot for the community.

Yet he was glad to see a change in the government, if not his MP. 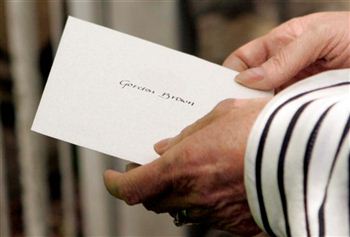 He said: “Gordon Brown has had a very, very hard time.  The stuff with the economy and things, he’s had a very hard ride.

“But it is about time for a change.

“Gordon Brown should stay on as our MP – he’s been very busy the last few years but has still done a lot for the local area and he’ll be able to do a lot more now.”

Jodie Mathieson, 17, a student from Lochgelly isn’t old enough to vote, but is worried that the election results will affect her future.

She said: “I’m not very happy with what has happened. I know I’m not old enough to vote but I’m worried about the future.

“My friends and I have been talking about it a lot and we’re worried about what all this will mean for our future when we go on to college and university.

“I’m quite happy with Gordon Brown and think he should stay on as MP – he can still do a lot for the area.”

Lynda Lindsay, 54, a call centre worker from Kirkcaldy, also thinks the former Prime Minister should stay in his position.

She said: “I think he’s done quite a lot for Kirkcaldy.

“I’ve heard that he’s thinking of standing down as MP but I think that’s wrong.

“Just because he didn’t win all over the UK doesn’t mean we don’t want him.

“I don’t think standing down would be good for the constituency – we need him here in Kirkcaldy.”

Meanwhile Louise Smart, 28, a new mother from Kirkcaldy said: “Gordon Brown has done a lot for us, and I think he should stay on.

“I was disappointed when he stepped down as Prime Minister but we should at least be able to keep him as our representative.”

Thomas Graham, 18, a groundskeeper from Lochgelly, also said Mr Brown had a hard time in government.

He said: “He’s done a good job in the time he’s been there even with all the things that have gone wrong. He took over at a hard time.

“Here he’s done alright and I would like him to stay on – he’s got a job to do.”

Others insisted it was Brown’s duty to remain as MP.

Andrew Bell, 22, a petrol station assistant from Lochgelly said: “I think he’s had a pretty hard time as Prime Minister – all that things that happened could have happened to anyone.

“Maybe some change is what the country needs – the new Prime Minister might get more things done and have more get up and go.

“But Gordon was voted in here and should do his job and represent the people who want him to.”

She said:  “I think it’s not been easy on him whilst he’s been in government. But he’s a good MP and can now do a lot more for the community.

“He really understands what we need.”

Yesterday, it seemed all their MP needed, was a little bit time.

PREVIEW – All singing, all dancing politics: A Very Brexit Musical

Farage and Clegg will be seen as most untrustworthy in TV debates, study says