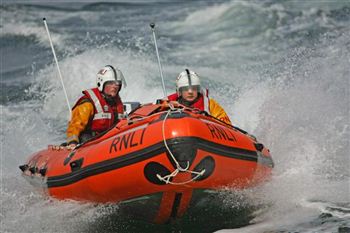 A KITE surfer had to be rescued from choppy seas after going missing off the coast of Montrose.

A helicopter from RAF Kinloss was scrambled to help search for the man, but lifeboat and coastguard crews saved him after an hour-long search.

He was found sitting on his surfboard with the kite wrapped around him for warmth.

The emergency call came from another kite surfer at 1.45pm on Thursday reporting that he had lost sight of his friend.

The pair had been riding waves in Lunan Bay, north of Arbroath, when the alarm was raised.

A Forth Coastguard spokesman said: “We got sight of him from land and directed our Lifeboat colleagues to his position.

“As soon as he was spotted, the helicopter was turned back.

“It was an unfortunate incident but he had a wetsuit on and we were more than happy to take him back to land.”