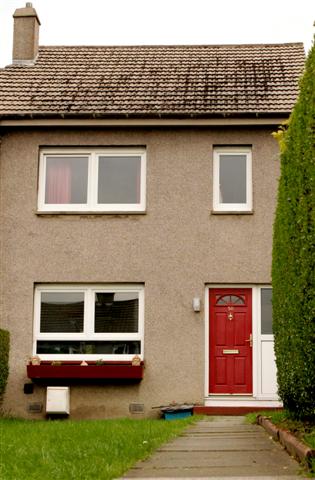 AN elderly woman has died and her husband rushed to hospital after a suspected gas leak at their home early yesterday.

The 61-year-old – named locally as Pauline Childs – was thought to have died from carbon monoxide poisoning.

Husband John, 70, was also rushed to St John’s Hospital in Livingston to be treated after inhaling the toxic gas.

It was understood that John had tried to summon help after coughing up blood, calling 999 to tell emergency services they were struggling to breathe at their council house in North Street, Ratho, on the outskirts of Edinburgh.

Several ambulance teams were despatched to the scene but were unable to revive tragic Pauline.

John was speeded to hospital by medics for life saving treatment.

The couple’s son also called John, 36, was thought to be at his hospital bedside.

He had earlier been spotted at the scene in tears.

There was no answer from his home last night.

Their other son Ray, 24, was said by neighbours to be travelling round the world.

It was unclear if the news had been broken to him yet.

But is the second tragedy to strike the family in just five years.

Pauline and John’s daughter, 22 year-old Jade, died in 2005 from a lung condition.

Records show that she died in 2005 from pulmonary oedema, a build up of fluid in the lungs, leaving behind a son Harvey Collins.

The latest tragedy yesterday left neighbours shocked for the family who had lived in the area for more than 20 years.

One neighbour, Leonard Dowling, who lives across the street from the Childs said that he had seen their son outside their house.

The 77 year old said: “Their son arrived there as it was all happening. I don’t know who was with him but the police spoke to him he was definitely crying – he was leaning on the fence with his head in his arms.

“That was just when they were taking his dad away in the ambulance. That must have been about 10.30am.

“I had first noticed something was going on when I saw the ambulance and about 16 police cars.

“There were four ambulances there as well at one point. The street was at a standstill.

“A doctor arrived with a defibrillator and went into the house. I knew it had to be something bad if they are all there.”

Mr Dowling added that the community was in shock after the tragedy.

He said: “It is difficult. I have stayed here all my days and it will hit the community hard.

“Everybody will feel shock because most people knew her. Most people here in North Street knew her, even if it was just to say hello.

“It’s sad when you hear what has happened. Very unexpected there is nothing that happens in Ratho so when it does it hits hard.”

Another neighbour, who lives two doors down from the Childs, said that it was the second time the family had been hit by devastating news.

She said: “Their daughter Jade died a few years ago. It was very sudden and they were very upset by it all.

“They do get to see their grandson a lot though which I think brings them joy.”

Another elderly neighbour, Eliza Mitchell, said that Mrs Childs was well liked in the community and would be missed.

She said:  “The Childs’ have been in the village all their life as far as I know.

“They are a lovely couple, the both of them would stop and say hello to everyone on the street but I didn’t know them that well.

“It’s just terrible what has happened, you just don’t expect that sort of thing to happen to anyone you know and on your street.

“They were well liked in the village and everybody is very upset by it.”

Local Claire McCready, 37, added: “She was a lovely, warm, outgoing, thoughtful and considerate person who would help anybody.

“This is a tragic loss.”

The Health and Safety Executive said they were investigating the incident.

Scotland Gas Networks said they had workers in the area making the “scene safe”.

A police spokesman said: “Lothian and Borders Police can confirm that a 61-year-old woman has died at a property in the Ratho area of Edinburgh.

“Enquiries are ongoing to establish the circumstances surrounding her death.

“A male was also taken to hospital as a precaution.”