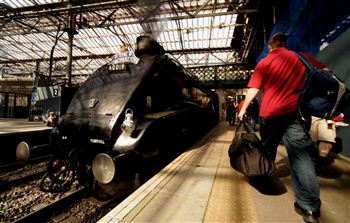 IT goes at a top speed of 75mph, takes 11 hours to reach London, and stops for an hour in York.

But desperate business travellers turned to a steam train for salvation yesterday to help get them to London and beat a cloud of volcanic ash from Iceland which had left their planes stranded at Edinburgh Airport.

The “Coronation” cross-border pleasure journey steamed to the rescue on a scheduled run from Waverley Station in the Scottish capital as a handful of fed up flyers decided to let the train take the strain instead.

Steam Dreams, the firm running the 80 year-old Sir Nigel Gresley train, had contacted local radio stations to flag up a remaining 50 empty seats on their return journey to London.

“I can’t believe my luck”

And to their amazement, a handful of hopeful travellers with no other option showed up at Waverley station with cash-in-hand for a seat on the locomotive.

They found themselves sitting alongside 400 railway enthusiasts enjoying the train’s first visit to Scotland since the 1960s.

Paying up to £299 for the privilege, it did have some other benefits as they were treated to a four-course meal on the way.

Operators of the 60019 Bittern loco boasted that although their journey took 11 hours, the hospitality was far superior to any airline.

Among the passengers who chose steam-power to get home from Scotland was Philip Brook, 60.

As an economics lecturer at London’s Henley College, he said he had to get home “by any means possible,” or face letting a class of students down. 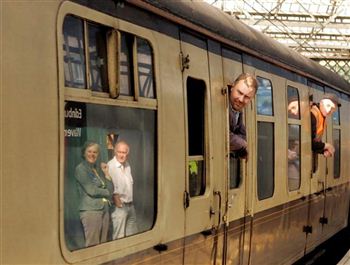 He said: “I can’t believe my luck.

“My BMI flight was cancelled and I was stuck in Scotland but simply had to get to London before the morning by any means possible.

“Somebody told me they heard on a radio travel bulletin that a steam train had a few seats left so I made a mad dash to the station to get one.

“The staff realised I was quite traumatised and I’m delighted to say they were happy to welcome me onboard.”

And he said that although the steam train takes around 11-times longer than a plane, the service was “exquisite.”

“It should have been a disaster”

Mr Brook said: “I’ve never even been on a steam train before and as soon as I came on they offered me a drink.

“The surroundings are far more exquisite than the plane I should be on.

“That I’m going to be getting a four-course meal and some wine to accompany the views makes me think I might get the train more often.

“Today should have been a disaster for me but the way it has worked out is just terrific.”

Another last-minute passenger John Higginson, 34, was catching The Coronation down to London to try to make a business meeting.

The businessman, from Edinburgh, had given up on making the appointment until a friend mentioned the steam train. 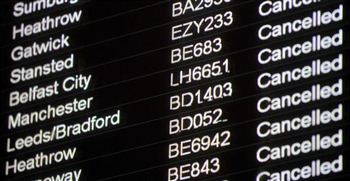 He said: “I’ve got a meeting in London this afternoon.

“Because so many of us can’t make it it’s been moved to tomorrow morning but I was still doubtful I would get down in time.

“My friend mentioned that this train was going down and I thought I might be able to secure a seat.

“It’s not that much more than the regular train and it is a much more exciting way to travel.

“It does take a long time but I’m hoping I’ll be able to get some work done as well as enjoy the scenery.”

The train, which left at 9.30am, was due to pull in at London Kings Cross at 8pm and included an hour-long refuel in York.

Operator Marcus Robinson said: “If you have the time it is a lot more pleasurable to travel by steam over the plane.

“The journey is smooth, there is no stressful check-in and security and the scenery is second to none.

“I am happy to report there is no microwaved aeroplane food in sight and there is no cheap plonk on my train.

“We serve up a fresh four-course meal to our passengers with top quality wine which all adds up to a delightful jaunt.” 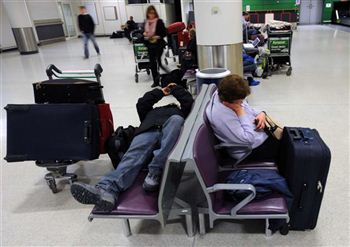 Every flight between 7am and 1pm was either cancelled or put on hold, leaving travellers to rebook later tickets or wait for airspace to be reopened.

Virgin boss Richard Branson’s view that the flight ban was “beyond a joke” was echoed by passengers in Scotland’s busiest airport.

Among those stuck in Scotland were New Zealanders Alistair Smith and Jeanette Thompson, both 64, whose round-the-world holiday was “ruined.”

Alistair said: “There has been a complete knee-jerk reaction in this country to the supposed danger of the volcano ash.

“They are being so super-sensitive about safety when really it is a complete a hoax.

“Not a single European airline has proven the effects of the ash on their engines.”

The Shaw family from Falkirk were left pondering over whether their holiday to Euro Disney would be possible.

Parents James, 36 and Lisa, 33 hoped to take their family to the Paris resort for a week.

But their delayed flight left them thinking up ways to break the bad news to their children, Brooklyn, 10 and Garry, 8.

Lisa, an auxiliary nurse, said: “We phoned up Thomas Cook and Air France last night and were told everything would be fine.

“But we knew as soon as we got here and saw the departures board that all the flights were off.

“How do you tell a child that they might not get to see Mickey and Minnie.

“All we can do is wait it out and hope we can get as much out of whatever time we have left.”