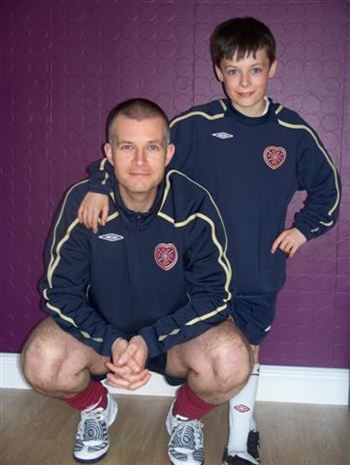 A BIG hearted dad is gearing up to run around every football ground in Scotland in just one weekend to help his son battle blood cancer.

Now, two years on, Lewis has responded well to treatment so his 35 year-old dad is planning a unique half-marathon challenge to raise money as a “thank you” to the medics who helped him.

Lewis’ courageous battle with AML has also inspired 50 of his dad’s friends who will run with him around all 12 Scottish Premier League grounds.

Their goal is to raise £10,000 for Leukaemia and Lymphoma Research.

Campbell, from South Queensferry, Edinburgh, told how his son quickly went from being a normal little boy to being forced to live in hospital.

He said: “It was a bolt from the blue.

“Apart from picking up more bruises he was like any other active four-year-old.

“The chemotherapy was very intensive and typically he was in hospital for 40 to 50 days per course, with little time in between courses, so at that point the hospital becomes your world.

“Thankfully Lewis responded well to treatment, both as a patient and a person, and to look at him now you’d never know there had been anything wrong with him.”

Since his son’s diagnosis, Campbell has committed himself to supporting the LLR charity.

He and his team of friends have already raised nearly £8,000 ahead of their race around the grounds on June 5 and 6.

As a die-hard Hearts fan who normally sits in the terraces, Campbell said he cannot wait to get a footballer’s view of Scotland’s most famous stadiums.

He will take his son Lewis on the run around the Tynecastle pitch before the team complete their challenge at Aberdeen’s Pittodrie Stadium later that day.

Campbell said: “Running in such iconic locations is really going to keep us going.

“People have been incredibly generous but we need to raise as much money as we can.

“Leukaemia and Lymphoma Research is a fantastic charity.

“I know for a fact that their continuing research will help more kids like Lewis beat blood cancers.”