Boy freed by firefighters after finger stuck in toy 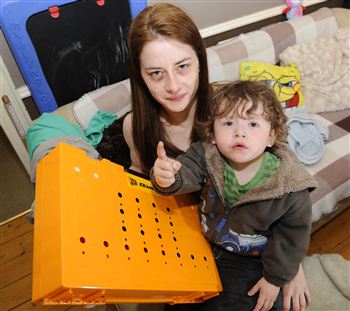 FIRE-FIGHTERS had to free a traumatised tot after he his finger jammed stuck in a toy work-bench.

Two-year-old Adam Brown had been playing with the JCB Tool Bench at his home in Edinburgh’s Shandon when his forefinger jammed fast in a hole.

Despite his mum Angela’s best efforts to free him using everything from shampoo to washing-up liquid, she had to give up and call in the professionals after almost two hours of tugging and squeezing.

In the end a squad of five fire-fighters and three ambulance workers had to join forces in order to spring him free.

Fire-fighters used real life bolt-cutters to free the budding builder so he could go to hospital and have the rest of the plastic removed.

Mother and son were shielded with a towel at the Sick Kids Hospital while nurses used wire-cutters to carefully chip away at what remained of the toy.

Single mum Angela Brown, 25, said afterwards: “I’m just so thankful it was the most traumatic thing that has ever happened to him.

“His finger was huge, like a balloon. It had been going on for so long that everyone was just really relieved.

“At one point we thought he might need sedated.

“We were in the house by ourselves and he was holding on to the edge of the toy. I just looked away for a second and he managed to put his finger in the hole.

“He was covered in it and it was all over the floor.

“I remembered when I was wee and got things stuck on my finger my mum always used hot water or butter and it came off.

“But his finger just wouldn’t come out.”

She added: “I called my parents, who only live a few streets along, and they came round and called the fire brigade.

“I was worried about his finger and I know the fire don’t deal with that. But they came with the ambulance as well. I had about five firemen and three or four paramedics in my house trying to work out what to do.

“Adam was screaming for the whole hour and a half that he was stuck which isn’t like him, he’s so well behaved.

“It’s a really thick toy so they were having trouble working out how to cut it without hurting Adam.

“Every time they moved it around it moved his finger and he was screaming. It was really traumatic.

“The longer it stayed on the more blood was being cut off and eventually they said they just had to cut a piece out and take him to the hospital.

“He went off to the hospital with a piece of the toy on his finger. It was at the hospital that they cut it off.

“I’ve got baby oil stains all over the carpet from where I was trying to get him out and black marks on the cream carpet in the hall from where the firemen were standing in the baby oil with their big boots.

“It’s just such a mess but I’m glad he’s alright.”

Once Adam was asleep after returning home, she e-mailed the toy manufacturer JCB.

She said: “It’s silly that the workbench is not made from thinner plastic.

“It’s a poor design, the plastic is very thick and the holes that are all over it to hang things on can be quite sharp.”

But a spokesman for JCB said there had been no reports that the product had caused injury before.

He added: “We’re surprised to learn of this. It’s the first time we’ve heard of anything like this involving this toy which has passed all the necessary safety tests and which has sold in the tens of thousands for many years.”