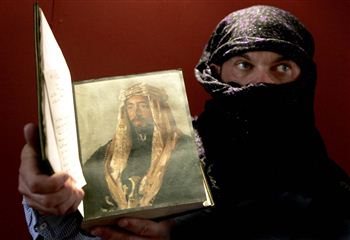 UNCOVERED: Auctioneers planning to sell a book by Lawrence of Arabia were stunned to find a letter hidden inside, handwritten by the man himself. Picture by Katielee Arrowsmith

Download more great images from our archive at this link

A LOST letter from Lawrence of Arabia is expected to raise nearly £30,000 when it goes under the hammer.

The note was found by complete co-incidence when auctioneer Simon Vickers was leafing through a rare copy of TE Lawrence’s 1926 book The Seven Pillars of Wisdom.

It is a snapshot of a bleak Britain following the First World War, written after Lawrence returned from famously leading an Arab revolt against Turkey.

A far cry from the excitement of desert warfare, he tells of his experiences at an RAF base, describing England as “a picture of dead earth in green and grey.”

The letter will be sold at auction next week along with an original print of the book – one of only 170 copies in existence.

Mr Vickers, a book specialist with auctioneers Lyon and Turnbull, said his surprise discovery was “wonderful.”

He said: “The book, a signed copy of Lawrence’s Seven Pillars of Wisdom, was brought in by the vendor, which is exciting enough as they are very rare.

“But it was when I was leafing through the book that I noticed the letter.

“It is a wonderful everyday letter from Lawrence discussing his move to RAF Cadet College in Cranwell, as well as trying to dissuade Lord Rennell from buying the very copy of Seven Pillars we are selling.”

The autographed letter is dated 3 November 1925 and addressed to Francis Rennell, an intelligence officer who later became Lord Rennell.

TE Lawrence was recruited by army intelligence in North Africa and worked as a junior officer in Egypt.

In October 1916 he led an Arab revolt against the Turkish, earning him the now famous name of Lawrence of Arabia.

He went on to become a special advisor to Winston Churchill in 1921 before joining the RAF in 1926.

The letter and the book are valued at £28,000 and will be auctioned by Lyon and Turnbull in Edinburgh next Wednesday.

ASDA has been accused of aggressive nationalism after marketing “British Sprouts”