Schoolboy Hailed A Hero After Saving Kids From Drowning

A teenager has been hailed a hero after risking his own life to save two young children from drowning.

Aaron Love was out cycling in Livingston, West Lothian, when he saw the two youngsters struggling in the water.

The 15-year-old jumped into the water and pulled them to safety on Monday night as he was making his way home for his dinner.

The brother and sister – thought to be aged five and eight – had been playing on a stretch of water near Lizzie Bryce roundabout in Livingston when they got into difficulty.

When Aaron came across their older sister screaming on the bank, he plunged into the muddy water and managed to get them to the side of the bank.

As well as making his parents Nick and Helen Love very proud, the teenager now stands in line for a bravery award after being nominated by officers from Lothian and Borders Police.

But the Tynecastle High School student said that he hadn’t given it a second thought before he dove in.

He said: “The route that I took when I went cycling takes you past this water – it’s like an old quarry.

“When I had gone past the first time I saw the kids mucking about at the side of the water playing with an old bit of log using it as a raft.

“My parents had called to ask me to go back for my tea. On the way back I saw their older sister – jumping up and down and screaming.

“She said to me ‘can you swim? My brother and sister are drowning’.’

“Without even thinking I ran down to the bottom of the bank and dived into the water.

“As I got over to them I couldn’t touch the bottom, it was so deep. It was a bit of a struggle.

“I grabbed the sister and started to swim back but I realised that there was another one.

“It wasn’t until I felt something around my knees and waist that I knew he was there – I just saw the girl up until then.

“I stuck my hand under and pulled him up – he had gone under.

“I kept him above my head whilst still holding his sister in my right arm.

“I waded across to the side. It was more of a struggle than a wade to be honest.

“I passed the brother up to the bank first because he had swallowed a lot of water and then passed his sister up.

“I think the brother had been keeping the sister up before I arrived. I think she had fallen in first and he had gone in to get her and got stuck too.””

After waiting for the ambulance to arrive, Aaron headed home to explain to his parents why he was late for his tea.

It wasn’t until he was out of the water that he realised that he had also lost his new phone and his glasses in the dramatic rescue. 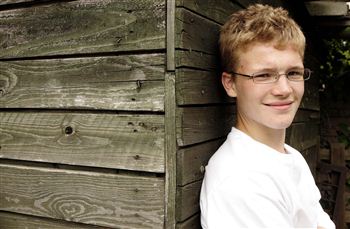 Aaron added: “I went back to my house to get my mum and dad and we came back to look for my phone and glasses and to see if the two kids were alright.

“My glasses either fell off when I jumped in or I broke them. It’s quite a dirty pond so there was no chance we were going to see them.

“My parents were in shock mostly when I came back and told them what happened. Then they were very proud of me for saving them.

“Later that night the police came round to my house and said that the children’s mum and dad were very, very happy and thankful that I had got them out.

“I felt it was a must to go and help them. I didn’t stop t think about anything else including my own safety.”

“Phones and glasses can be easily replaced but lives can’t.”

Luckily Aaron himself managed to escape the rescue with just a few cuts and bruises.

The brave teenager said: “I think it was just the shock but it was quite hard to breathe because it was freezing cold in the water.

“I came away with minor injuries on my head where I had scuffed it on a rock on the way in but I was fine.

“I can swim like a fish so I didn’t think twice about going into the water but it was harder than I thought it would be.

“The two kids were quite wee but heavy.” “

With his Standard Grades finished and another two weeks until h’’s back to school, Aaron doesn’t have many plans for his well-earned break.

He said: “I’m going to try and stay away from ponds for now.”

For Aaron’s parents, what started as a night of worry when their son failed to get home turned into a very proud moment.

Nick Love, 40, said: “We were a tad angry with him because he was 25 minutes late for his dinner which was getting cold on the table.

“When he did arrive he was standing there dripping with no glasses on. My initial thought was that he had fallen in the river, but then he told us he had saved two children from drowning.

“We had tried to ring him as time went by and he wasn’t back, but of course his phone was at the bottom of the river by then.

“We are extremely proud of him and love him for what he has done.”

“Tom Rae, Head Teacher at Tynecastle High School said: “Aaron acted with tremendous bravery and put others first before himself.

“He was a good citizen and because he is very interested in nature pursuits this led to him being in the right place at the right time. 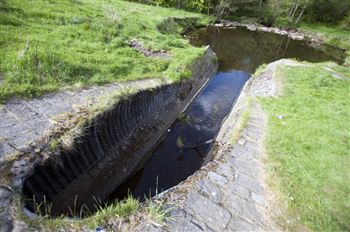 “It’s fantastic that he is being nominated for such a high award from the police and we are all very proud of him at the school.”

A police spokesman said: “We can confirm they responded to a call relating to youths who had been experiencing difficulty in a body of water in West Lothian.

“The youths, who were conveyed to St John’s hospital as a precaution has been assisted by a 15-year-old boy whose actions ensured the incident did not become more serious.

“We would like to thank the young man for his bravery and will be recommending him for a Meritorious Award for his actions.”