Man Stabbed And Woman Struck By Car In Night Of Horror

POLICE have tonight (wed) sealed off a residential street in Edinburgh after a woman was struck by a car in an alleged hit and run – just yards from where a stabbing took place at a house a few doors away.

Ambulance crews were called to the scene shortly before 10pm after the woman was hit at the corner of Stenhouse Street West and Stenhouse Gardens. 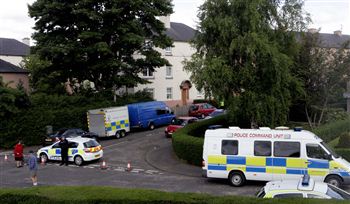 Her condition was unknown.

Just yards away police strung up blue and white crime tape and refused to let anyone enter the stairwell to No 1 Stenhouse Gardens North telling locals only that a “serious incident” had occurred.

What were thought to be CID officers arrived at the scene under an hour later while forensic teams gathered evidence.

The ambulance service confirmed there had been a stabbing.

One local said: “We saw them bringing someone out on a trolley and they were working on them, pumping them hard, like resuscitation.

“Someone said they saw a man being put in a police car in handcuffs.

“There were two ambulances and loads of police.

“One of them was over trying to help whoever had been knocked down. The other ran into the house.

“Now there are people are there wearing white suits from head to toe – they must be the forensic guys or something.

Another neighbour said: “As far as we know the man living in the ground flat has been stabbed.”

“The police won’t tell us anything. They just told us to get inside and close our doors.

“It’s terrifying. Nothing like that has ever happened around here before, it’s mostly pensioners and young families who live here.

“There’s police and tape everywhere. They’ve blocked off the streets all around with cars and vans.

“I just wish they’d tell us what is going on.”

The Scottish Ambulance Service confirmed they were in attendance.

A spokesman said: “We are attending the scene of a Road Traffic Accident in the Stenhouse area.

“One woman has been run over by a car and taken to hospital.

“A man was also taken to hospital with stab wounds.”

Lothian and Borders Police said they were unable to provide any further details or confirm whether or not anyone had been arrested or detained in connection with the incident.

A spokeswoman said: “We are dealing with an ongoing incident, that’s all I can say.”