THE former lover of Suzanne Pilley today (wed) received a mystery package from the firm where he and the missing 38-year-old worked.

David Gilroy, 47, spent most of the day shut in his home after being suspended by bosses at Infrastructure Managers following the disappearance of his former colleague Suzanne on May 4. 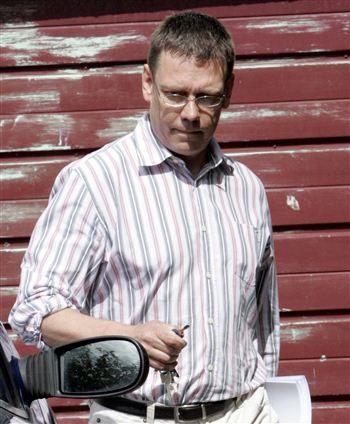 He left his home in Edinburgh’s Silverknowes Brae yesterday only briefly to drop off his wife Andrea and their children elsewhere.

But he made an appearance to sign for a large package delivered by a courier around 2pm.

Mr Gilroy opened his door just long enough to snatch the package from the arms of the City Courier worker before passing out a receipt.

He refused to answer questions about his movements in days after Suzanne’s disappearance.

The courier said: “His hand was shaking as he signed for it. It was from the company the he works for, I don’t know what it was. It was a package, it wasn’t heavy.”

Detectives believe Suzanne has been murdered and her body dumped in the Argyll area.

They have seized a silver car and, despite claims it had been professionally deep cleaned, reports suggest that forensic officers have found Suzanne’s DNA in the boot of the Vauxhall vehicle.

Sniffer dogs have been deployed with a search team combing an area of Argyll for her remains.

It was claimed police have put together the main threads of their murder inquiry are ready to make an arrest within 48-hrs of her body being found.

Mr Gilroy, a former Naval officer, has consistently denied any involvement in her death or disappearance.