A PARADE of balloon festooned taxis made their way through Edinburgh today (Tues) bringing cheer to a rainy day.

On board were around a hundred children with special needs on their annual trip to the beach.

The fleet of 60 cabs pulled out of Murrayfield stadium in the drizzle and made their way through the capital towards the coast heading first for Musselburgh for ice cream. 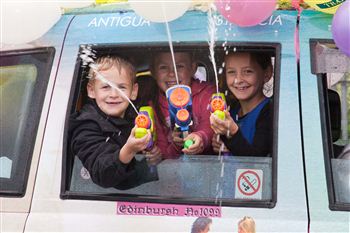 Then it was on Yellowcraigs for a day out at the beach.

As well as hackneys covered in balloons, three taxis had made a special effort and transformed their vehicles into floats.

The 64th annual taxi driver outing was organised by the Kiddie’s Outing Committee to give kids with special needs and illnesses a well deserved day out.

Alex Lyons from the committee said: “This is a wonderful day out for both the children and the drivers.

“I’d also like to thank the many people and organisations who assist us throughout the year to make the day out possible.”

The prizes were handed out by Justice Secretary Kenny MacAskill who joined the parade on the party bus for a lift back to parliament. 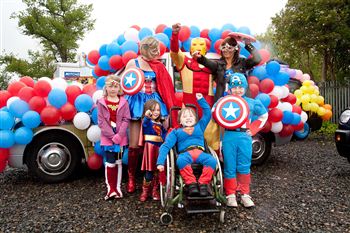 The MSP for Edinburgh East and Musselburgh, who joined the children and drivers at this morning’s event, said: “I am delighted to be invited along again this year.

“The taxi drivers in the city have to be congratulated on the excellent work that they do and for making this possible.

“Although we are all facing tough times with rising fuel costs and tightening our belts due to the recession, year after year these dedicated taxi drivers put on a fantastic day for the children.

“To see the smiles on each and every one of their faces makes it all very worthwhile.” 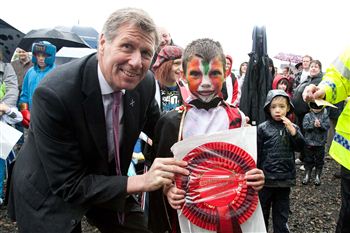 The parade of balloons and loud music accompanied by police outriders brightened up the capital.

He added: “The Taxi Trade Children’s Outing is a really worthwhile event, giving children with special needs a fun day out at the seaside and the chance to ride in colourfully decorated taxis.

“It’s always a cheerful sight to see the parade of festive cabs making their way through the city and out to the coast.”

Politicians to use public purse to fund provost portraits