A PENSIONER is recovering after a bus made an unscheduled stop – in her front room. 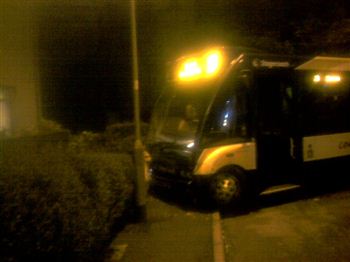 elen Wilson, 89, was sleeping at her home in Methil in Fife when a bus left the road and ploughed through her front garden and into the wall of her home on Wednesday night.

Police, ambulance and teams of firefighters raced to the scene after the number 13 Stagecoach service smashed into the property at Methilhaven Road shortly after 11.30pm.

Police said fire crews ushered the shaken woman out a top floor window of  the semi-detached house after before she was treated by paramedics for shock.

However she was otherwise uninjured while the driver and single passenger on the bus also escaped unhurt.

Yesterday the front of the home was still boarded-up and track marks made by the single-decker vehicle could be seen on an embankment leading down from the main road.

The flattened hedge in front of the brown, two storey building was also being held in place by a sheet of timber, while debris could be seen scattered in the garden.

He said: “As I understand it a bus driver was coming from Kirkcaldy and somehow has gone through the hedge and into the wall.

“I think Helen was in her bed at the time, thankfully she is unhurt and she is staying with my grandparents for now.

“She is okay, she is actually quite chirpy and was asking for her porridge this morning.”

Mr Douglas said Helen, a widow, had lived in the home for the past 20 years.

Bemused neighbours ran into the street after hearing the vehicle slam into the home on Wednesday night.

David Comrie, 37, lives just two doors from the house after moving in recently.

The Royal Mail manager said: “It was the back of 11 on Wednesday, the number 13 bus came down the road and a dog ran in front of it and the driver swerved.

“I was just sitting in the living-room and I heard an almighty noise.

“I just came out and saw the bus backed on to the grass.

“I was gobsmacked, I could not believe it.

“The bus was hard up against the lampost outside of her home, it was like something you see on television.

“I don’t know how they managed to get the bus out.

“It is a miracle nobody was hurt, I think just with the time of night it was nobody was about.”

Mum-of-one Gina Hunter was among the first on the scene and took pictures of the stricken bus on her mobile phone.

The 37-year-old said: “We were having a takeaway and the delivery driver told us about a bus crashing into a house so we came round for a look.

“There were loads of police and the fire brigade were there as well a few bus drivers.

“I was really surprised that the bus had went across the main road and into the house, it is not something you see every day.

“I’m just glad that nobody was hurt.”

A Fife Constabulary Spokesman confirmed that Stagecoach Buses had removed the vehicle following the collision.

He said the vehicle had punched a 3ft by 2ft wall in the building but that neither the bus driver nor the single passenger on board were hurt in the incident.

A Fife Fire and Rescue Service spokesman added: “Two appliances attended at 11.55pm after a bus crashed into a wall at a building in Methilhaven Road.

“An elderly female was led to safety by fire fighters but was uninjured.”

Stagecoach confirmed the bus was one of their vehicles and said that they were taking the incident “seriously”.

A spokeswoman for the firm said: “An incident occurred at around 11.40pm last night where one of our vehicles came off the road in Methil, colliding with a house on Methilhaven Road.

“Safety is our number one concern and we are thankful that the driver and passenger on board are uninjured.

“Our thoughts are with the lady who was inside the house who we believe is being treated for shock.”

“We are treating this matter very seriously and are currently investigating the circumstances which will include interviewing the driver and viewing CCTV footage.”

It was unclear if or when she could return home.

Gary Nicoll, building standards and safety lead officer with Fife Council, said: “Our role is to ensure the building is safe for both the occupier and the public. One of our officers visited the property last night as well as this morning.

“The building is structurally unstable and we have cordoned off the area to ensure public safety.”

He added: “We will continue to monitor the situation.”