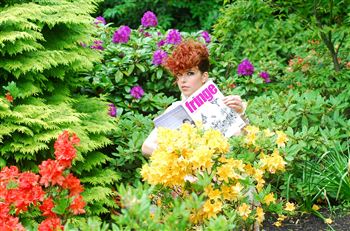 BLOOMING GOOD READ: With a colourful fringe of her own, model Christina Kernohan, 27, shows off the 2010 Festival Fringe programme, released today.  A host of famous faces are set to flock to Edinburgh this summer for what promises to be the city’s biggest ever Fringe. Chart-toppers Dizzee Rascal, Jason Derulo and Plan B were among the 2,453 acts revealed.

The talent-packed line-up was unveiled at an Alice in Wonderland themed launch in Princes Street Gardens.

Tickets for all performances go on sale at 8am tomorrow (Friday).

Generating an estimated £75million for the capital’s economy, the Fringe is a key event for Scottish tourism.

Social networking features heavily in the Fringe marketing drive this year, with the introduction of an iPhone app offering half price tickets.

The front cover of this year’s 344-page programme was designed by artist Johanna Basford who used ideas submitted by Fringe fans in a two day Twitter brainstorm.

Also launched yesterday was the line-up for this year’s Edinburgh comedy festival, boasting 350 shows staging 7,000 performances between them.

Taking to stages across the city will be Paul Merton, Arthur Smith, Jim Jefferies, Ardal O’Hanlon and Jason Byrne.

With new venues and new acts from all over the world, organiser Kath Mainland is promising a show to “engage, enthral, excite and delight.”

She said: “Edinburgh in August will be bursting with the most talented artists from every area of the arts world. 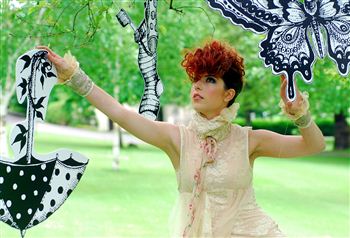 “Nowhere else can you see such a variety of world class talent and range of shows that are guaranteed to engage, enthral, excite and delight.

“As the largest arts festival, the Fringe attracts performers and audiences from every corner of the world.

“I look forward to welcoming them to Edinburgh and kicking off what is set to be the biggest and most exciting Fringe to date.”