SCOTS telly star Gail Porter says happiness made her hair grow back after showing off a new look today (FRI).

The presenter was shocked when five years of baldness caused by alopecia came to an end – so much so that she didn’t know what to do with it.

But now the 39 year-old is excited that her chic new look has re-opened career avenues which her condition cruelly halted.

Sporting a cropped blonde hairstyle on BBC Breakfast, she said she was “in a good place.” 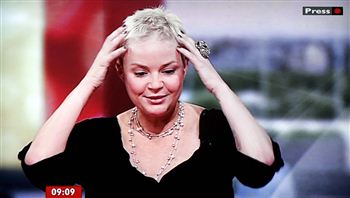 She was nearly in tears when shown a clip of the 2006 documentary, Laid Bare, in which a doctor told her not to expect her hair to return.

But she hit out at the doctor for the way he broke the life-changing news, saying it left her depressed.

She said: “It was hard to watch that back because he was a little bit overly harsh.

“He did affect me quite badly and I was quite depressed after that.Alopecia

“I don’t think he was the best person to handle that, because it did grow back.

“Hopefully I can give hope to other people that have got alopecia.”

She also put the return of her hair down to being in love, after finding a new boyfriend at the end of last year.

She said indie rocker Jonny Davies, 24, of band New Vinyl, claims he is the reason her hair has grown back.

But Gail says it could also be down to a special potion she rubs on her scalp.

Asked what made her hair return, she said: “I’m just in a good place, I’m happy and I’ve got a new boyfriend and he puts it down to him.

“I’ve also got a little concoction of avocado oil and olive oil which I rub on my scalp every day and it seems to be working.”

Her new hair has brought with it new excitements, including going to the hairdresser.

And she joked that TV producers think she is “suddenly more intelligent.”

She said: “At first there were little bits coming through and I was shaving them off because they looked weird.

“But I’ve left it and it was so nice to go to the hairdresser again.

“Losing your hair makes you a lot stronger and makes you realise a lot of people go through a lot worse.

“Any change in appearance is going to do that.

“But when my hair fell out I was suddenly a lot more intelligent and everyone forgot I was blonde and I was doing these documentaries, which is great.”