Parents Rally To Save Private School From Closure

DETERMINED parents staged a protest today to save one of Scotland’s oldest private schools after it was plunged into administration.

Management at St Margaret’s School in Edinburgh watched the pupil roll fall from its 800 capacity to just 390 and had desperately tried to fend off an annual debt of £500,000 by asking pupils’ parents for cash. 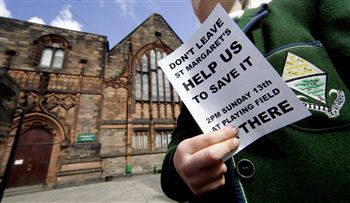 But despite this today (Fri), for the time in its 120 year history, liquidators were called in to see the school through to its closure at the end of the month.

The news broke on the morning after the school leavers’ ball and careers day.

By afternoon, families were staging a ‘save our school’ demonstration outside the gates.

Others stayed up all night after the announcement leaked drafting a business plan to try and keep the school going.

Some said they were willing to pay even more than the £3,000 annual fee to send their children to the leafy school.

Parents and Friends Association chair Val Devlin, 40, said: “Parents were told by email last night and it sent shockwaves around the community.

“But we have some very smart cookies among us in the parent community and we will not leave this school.

“We owe it to our children and the teachers too, who have basically been given two weeks notice by the board of governors.

“They have claimed the role was falling but it actually rose by 19 per- cent in the past term.

“That proves it is a viable business and some mums and dads were up all night and off work today speaking to potential financiers.”

She said: “My daughter is devastated and so am I because we were never given a clue the financial position was so bad.

“As the top school in Edinburgh it is the last thing you expect.

“I would pay double for her to keep coming here and I have spoken to teachers willing to take a pay cut to keep it going.

Mike Pringle, Liberal Democrat MSP for Edinburgh South said he was telling parents to start looking at other schools to send their children.

He said: “This is incredibly sad news and will obviously be a massive blow for pupils, parents and everyone else involved with the School.

“St Margaret’s was a 110 year institution with a proud tradition of providing an excellent education.

“I visited just recently and it was fantastic to meet such an enthusiastic and dedicated group of staff and pupils.

“In the short term it is vital that pupils from the school enjoy a smooth transition to other schools in the area.

“I would encourage any parents who are worried to phone the dedicated parent hotline as soon as possible.”

Blair Nimmo, Provisional Liquidator and Head of Restructuring for KPMG in Scotland said it was a hard time for families and staff connected to the school.

He said: “St Margaret’s is a well established school with an excellent reputation and this news will be very distressing for many pupils, parents, teaching and all other staff past and present.

“We intend to continue providing the School’s services through to the end of term and will do whatever we can to assist pupils, parents and staff during this difficult time.”